The Blood of the Colony: Wine and the Rise and Fall of French Algeria (Hardcover) 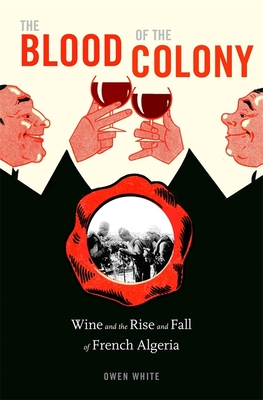 The Blood of the Colony: Wine and the Rise and Fall of French Algeria (Hardcover)

The surprising story of the wine industry's role in the rise of French Algeria and the fall of empire.

"We owe to wine a blessing far more precious than gold: the peopling of Algeria with Frenchmen," stated agriculturist Pierre Berthault in the early 1930s. In the last decades of the nineteenth century, Europeans had displaced Algerians from the colony's best agricultural land and planted grapevines. Soon enough, wine was the primary export of a region whose mostly Muslim inhabitants didn't drink alcohol. Settlers made fortunes while drawing large numbers of Algerians into salaried work for the first time. But the success of Algerian wine resulted in friction with French producers, challenging the traditional view that imperial possessions should complement, not compete with, the metropole. By the middle of the twentieth century, amid the fight for independence, Algerians had come to see the rows of vines as an especially hated symbol of French domination. After the war, Algerians had to decide how far they would go to undo the transformations the colonists had wrought--including the world's fourth-biggest wine industry. Owen White examines Algeria's experiment with nationalized wine production in worker-run vineyards, the pressures that resulted in the failure of that experiment, and the eventual uprooting of most of the country's vines. With a special focus on individual experiences of empire, from the wealthiest Europeans to the poorest laborers in the fields, The Blood of the Colony shows the central role of wine in the economic life of French Algeria and in its settler culture. White makes clear that the industry left a long-term mark on the development of the nation.