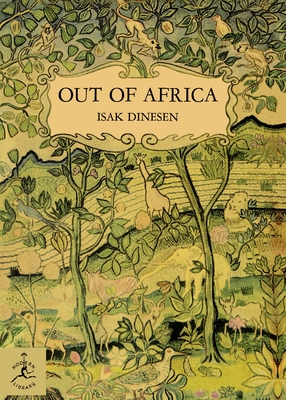 In this book, the author of Seven Gothic Tales gives a true account of her life on her plantation in Kenya. She tells with classic simplicity of the ways of the country and the natives: of the beauty of the Ngong Hills and coffee trees in blossom: of her guests, from the Prince of Wales to Knudsen, the old charcoal burner, who visited her: of primitive festivals: of big game that were her near neighbors--lions, rhinos, elephants, zebras, buffaloes--and of Lulu, the little gazelle who came to live with her, unbelievably ladylike and beautiful.

The Random House colophon made its debut in February 1927 on the cover of a little pamphlet called "Announcement Number One." Bennett Cerf and Donald Klopfer, the company's founders, had acquired the Modern Library from publishers Boni and Liveright two years earlier. One day, their friend the illustrator Rockwell Kent stopped by their office. Cerf later recalled, "Rockwell was sitting at my desk facing Donald, and we were talking about doing a few books on the side, when suddenly I got an inspiration and said, 'I've got the name for our publishing house. We just said we were go-ing to publish a few books on the side at random. Let's call it Random House.' Donald liked the idea, and Rockwell Kent said, 'That's a great name. I'll draw your trademark.' So, sitting at my desk, he took a piece of paper and in five minutes drew Random House, which has been our colophon ever since." Throughout the years, the mission of Random House has remained consistent: to publish books of the highest quality, at random. We are proud to continue this tradition today.

This edition is set from the first American edition of 1937 and commemorates the seventy-fifth anniversary of Random House.
Isak Dinesen is the pseudonym of Karen Blixen, born in Denmark in 1885. After her marriage in 1914 to Baren Bror Blixen, she and her husband lived in British East Africa, where they owned a coffee plantation. She divorced from her husband in 1921 but continued to manage the plantation for another ten years, until the collapse of the coffee market forced her to sell the property and return to Denmark in 1931. There she began to write in English under the nom de plume Isak Dinesen. Her first book, and literary success, was Seven Gothic Tales. It was followed by Out of Africa, The Angelic Avengers (written under the pseudonym Pierre Andrézel), Winter's Tales, Last Tales, Anecdotes of Destiny, Shadows on the Grass, and Ehrengard. She died in 1962.