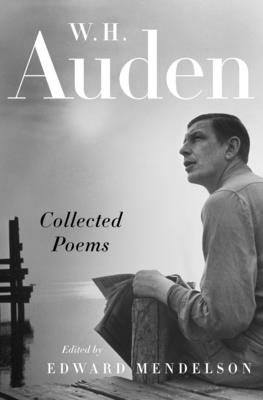 
In Stock—Click for Locations
To commemorate the centennial of W. H. Auden’s birth, the Modern Library offers this elegant edition of the collected poems of one of the greatest poets of the twentieth century.

This volume includes all the poems that Auden wished to preserve, in a text that includes his final revisions, with corrections based on the latest research. Auden divided his poems into sections that corresponded to what he referred to as chapters in his life, each one beginning with a change in his inner life or external circumstances: the moment in 1933 when he first knew “exactly what it means to love one’s neighbor as oneself”; his move from Britain to America in 1939; his first summer in Italy in 1948; his move to a summerhouse in Austria in 1958; and his return to England in 1972.

Auden’s work has perhaps the widest range and the greatest depth of any English poet of the past three centuries. From the anxious warnings of his early verse through the expansive historical perspectives of his middle years to the celebrations and thanksgiving in his later work, Auden wrote in a voice that addressed readers personally rather than as part of a collective audience. His styles and forms extend from ballads and songs to haiku and limericks to sonnets, sestinas, prose poems, and dozens of other constructions of his own invention. His tone ranges from spirited comedy to memorable profundity–often within the same work. His poems manage to be secular and sacred, philosophical and erotic, personal and universal.

“All the poems I have written were written for love,” Auden once said. This book includes his famous early poems about transient love (“Lay your sleeping head, my love,” “Stop all the clocks, cut off the telephone”) and his later poems about enduring love (“In Sickness and in Health,” “First Things First”). The book also includes Auden’s longer, more thematically varied poems, from the expressionist charade “Paid on Both Sides” to the formal couplets of “New Year Letter”; the darkly comic sequel to The Tempest, “The Sea and the Mirror”; and a baroque eclogue set in a wartime bar, “The Age of Anxiety.”

This new edition includes a critical appreciation of Auden by Edward Mendelson, the editor of the present volume and Auden’s literary executor.

“W. H. Auden had the greatest gifts of any of our poets in the twentieth century, the greatest lap full of seed.”
–James Fenton, The New York Review of Books

“At the beginning of the new century, [Auden] is an indispensable poet. Even people who don’t read poems often turn to poetry at moments when it matters, and Auden matters now.”
–Adam Gopnik, The New Yorker
W. H. Auden was born in York, England, in 1907. His first book of poems was published in 1930, followed by a dozen volumes of shorter and longer poems. He collaborated on three plays with Christopher Isherwood and wrote books about his travels to Iceland (with Louis MacNeice) and wartime China (with Christopher Isherwood). In 1939 he settled in New York and became an American citizen in 1946. In collaboration with his companion Chester Kallman, he composed opera libretti for Igor Stravinsky, Hans Werner Henze, and Nicholas Nabokov. In 1972 Auden left his winter home in New York and returned to Oxford. He died in Vienna in 1973.