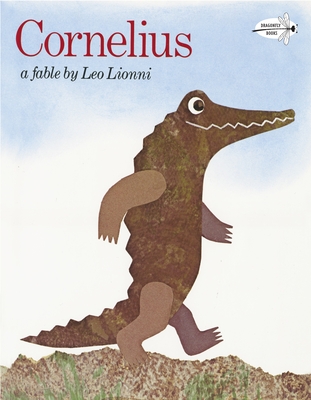 
Special Order—Subject to Availability
The beloved fable about being yourself from four-time Caldecott Honor-winner Leo Lionni.

Unlike other crocodiles, Cornelius walks upright, sees things, and does tricks no other crocodile can. His friends aren't impressed. "So what?" they say when he demonstrates standing on his head or hanging from his tail. At first, Cornelius is disappointed, but things aren't always what they seem, and life on the riverbeach is about to undergo some big changes. Children will draw inspiration from this tale of a crocodile who marches to his own drummer.
Leo Lionni, an internationally known designer, illustrator, and graphic artist, was born in Holland and lived in Italy until he came to the United States in 1939. He was the recipient of the 1984 American Institute of Graphic Arts Gold Medal and was honored posthumously in 2007 with the Society of Illustrators’ Lifetime Achievement Award. His picture books are distinguished by their enduring moral themes, graphic simplicity and brilliant use of collage, and include four Caldecott Honor Books: Inch by Inch, Frederick, Swimmy, and Alexander and the Wind-Up Mouse. Hailed as “a master of the simple fable” by the Chicago Tribune, he died in 1999 at the age of 89.
"Endearingly captures the spirit of the seeker, the thinker, and those who are born to be different. Lionni's collages are wonderfully rich and colorful, perfectly setting the stage for a tale children will enjoy." —School Library Journal (Starred Review)