Many Thousand Gone: African Americans from Slavery to Freedom (Paperback) 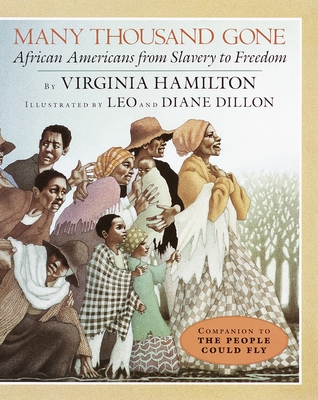 Many Thousand Gone: African Americans from Slavery to Freedom (Paperback)


In Stock—Click for Locations
Unavailable for several years, Virginia Hamilton’s award-winning companion to The People Could Fly traces the history of slavery in America in the voices and stories of those who lived it. Leo and Diane Dillon’s brilliant black-and-white illustrations echo the stories’ subtlety and power, making this book as stunning to look at as it is to read.

“There is probably no better way to convey the meaning of the institution of slavery as it existed in the United States to young readers than by using, as a text to share and discuss, Many Thousand Gone.”
—The New York Times Book Review
Virginia Hamilton, storyteller, lecturer, and biographer, was born and raised in Yellow Springs, OH, which is said to be a station on the Underground Railroad. Her grandfather settled in the village after escaping slavery in Virginia. She was educated at Antioch College and Ohio State University and did further study in literature and the novel at the New School for Social Research. Virginia was the first African American woman to win the Newbery Award, for M.C. Higgins the Great. Since then, she has won three Newbery Honors and three Coretta Scott King Awards. In 1992, Virginia was awarded the Hans Christian Andersen Medal, which is presented every two years by the International Board on Books for Young People, in recognition of her entire body of work. Virginia writes first for the pleasure of using words and language to evoke characters and their world, and in historical accounts such as Anthony Burns, the lives of real people. Secondly, Hamilton writes to entertain, to inspire in people the desire to read on and on good books made especially for them.

Leo and Diane Dillon have twice won the Caldecott Medal
"Hamilton is neither sensational nor sentimental, even as she celebrates the many acts of shining courage. This makes us all want to know more, much more, about those many thousand gone."--(starred) Booklist.

"A compelling book, outstanding in every way."--(pointer) Kirkus.