Fire on the Mountain (Paperback) 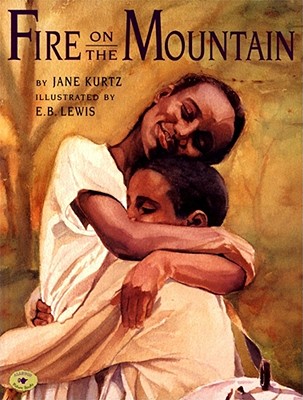 Fire on the Mountain (Paperback)


Not On Our Shelves—Ships in 1-5 Days
Challenged by his master to spend a bitter-cold night alone in the mountains, Fire on the Mountain is about an Ethiopian boy who bets his future that he will succeed.

When his master refuses to recognize the boy's victory, the boy and his sister decide to beat the rich man at his own game. It's all in Jane Kurtz's fantastic tale, Fire on the Mountain.
Jane Kurtz was born in Portland, Oregon, but when she was two years old, her parents decided to move to Ethiopia, where she spent most of her childhood. Jane speaks about being an author at schools and conferences—in all but eleven of the United States, so far, and such places as Uganda, Nigeria, Kenya, France, Germany, Romania, England, Indonesia, Cambodia, the Philippines, and Japan. She helped start Ethiopia Reads (EthiopiaReads.org), a nonprofit that has opened the first libraries for children in Ethiopia. She is the author of many books for children.

E.B. Lewis is the award-winning illustrator of such books as Virgie Goes to School with Us Boys by Elizabeth Fitzgerald Howard, which was a Coretta Scott King Illustrator Honor Book, and This Little Light of Mine. He received the Caldecott Honor for Coming on Home Soon by Jacqueline Woodson and the Coretta Scott King Illustrator Award for Talkin’ About Bessie: The Story of Aviator Elizabeth Coleman by Nikki Grimes. E.B. Lewis lives in New Jersey, and you can visit him online at EBLewis.com.