A Proud Taste for Scarlet and Miniver (Paperback) 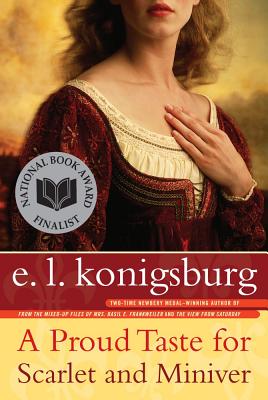 A Proud Taste for Scarlet and Miniver (Paperback)


Not On Our Shelves—Ships in 1-5 Days
Eleanor of Aquitaine, wife to two kings, mother to two others, has been waiting in Heaven a long time -- eight centuries, more or less -- to be reunited with her second husband, Henry II of England. Finally, the day has come when Henry will be judged for admission. While Eleanor, never a patient woman in life or afterlife, waits, three people, each of whom was close to Eleanor during a time of her life, join her. Their reminiscences do far more than help distract Eleanor -- they also paint a rich portrait of an extraordinary woman who was front and center in a remarkable period in history and whose accomplishments have had an important influence on society through the ages.
E.L. Konigsburg is the only author to have won the Newbery Medal and a Newbery Honor in the same year. In 1968, From the Mixed-Up Files of Mrs. Basil E. Frankweiler won the Newbery Medal and Jennifer, Hecate, Macbeth, William McKinley, and Me, Elizabeth was named a Newbery Honor Book. Almost thirty years later she won the Newbery Medal once again for The View from Saturday. Among her other acclaimed books are Silent to the Bone, The Outcasts of 19 Schuyler Place, and The Mysterious Edge of the Heroic World.