Jose! Born to Dance: The Story of Jose Limon (Hardcover) 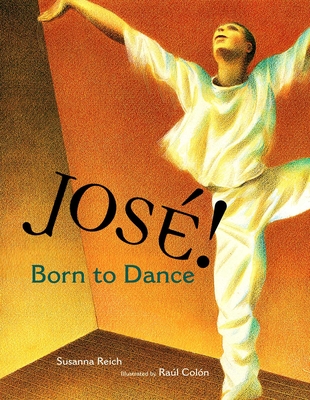 Jose! Born to Dance: The Story of Jose Limon (Hardcover)


Not On Our Shelves—Ships in 1-5 Days
José! Born to Dance tells the story of a boy born in a small Mexican village who became one of the greatest dancers of all time—José Limón.

José was a boy with a song in his heart and a dance in his step. Born in Mexico in 1908, he came into the world kicking like a steer, and grew up to love to draw, play the piano, and dream. José's dreaming took him to faraway places. He dreamed of bullfighters and the sounds of the cancan dancers that he saw with his father. Dance lit a fire in José's soul.

With his heart to guide him, José left his family and went to New York to dance. He learned to flow and float and fly through space with steps like a Mexican breeze. When José danced, his spirit soared. From New York to lands afar, José Limón became known as the man who gave the world his own kind of dance.

Susanna Reich's lyrical text and Raúl Colón's shimmering artwork tell the story of a boy who was determined to make a difference in the world, and did. José! Born to Dance will inspire picture book readers to follow their hearts and live their dreams.
Susanna Reich is the author of Clara Schumann: Piano Virtuoso, which was named an NCTE Orbis Pictus Honor Book, an ALA Notable Book, and a School Library Journal Best Book of the Year. A former professional dancer, Ms. Reich lives with her family in Ossining, New York.

Raúl Colón has illustrated several highly acclaimed picture books including the New York Times bestselling Angela and the Baby Jesus by Frank McCourt and Susanna Reich’s José! Born to Dance, which received a starred review in Booklist. Mr. Colón lived in Puerto Rico as a young boy and now resides in New City, New York, with his family.