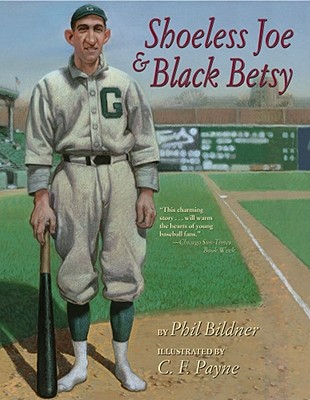 By Phil Bildner, C. F. Payne (Illustrator)
List Price: $9.99
Our Price: $8.99
(Save: $1.00 10%)
In Stock—Click for Locations
This inspirational picture book is based on the true story of Shoeless Joe Jackson and his bat, two of the greatest players in baseball history.

Some say Shoeless Joe Jackson was the greatest hitter ever. But Shoeless Joe had a partner: his bat, Black Betsy. And if not for the faithful Black Betsy, Joe might never even have made it to the major leagues.
Phil Bildner is a former New York City public school teacher who lives in Newburgh, New York. He spends much of his year visiting schools and libraries around the country and world. He is the author of over twenty books including the middle grade novel A Whole New Ballgame and picture books Marvelous Cornelius, The Soccer Fence, The Hallelujah Flight, and Twenty-One Elephants. Along with Loren Long, he is the coauthor of the New York Times bestselling Sluggers series. Visit him online at PhilBildner.com.

C. F. Payne has illustrated more than a dozen picture books, including the New York Times bestselling Mousetronaut by astronaut Mark Kelly; the Texas Bluebonnet winner Shoeless Joe & Black Betsy, written by Phil Bildner; and the New York Times bestsellers The Remarkable Farkle McBride and Micawber, both by John Lithgow. He teaches at the Columbus College of Art & Design, where he is the chair of the Illustration Department. Payne lives with his wife and children in Cincinnati, Ohio. Visit him online at CFPayne.com.
"One of baseball's greats receives star treatment in this compelling book."
-- Publishers Weekly