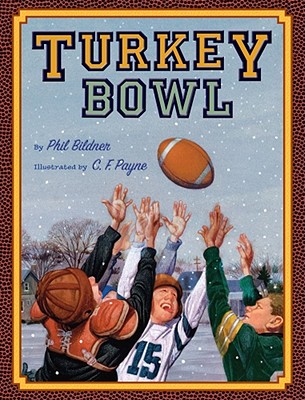 It's Thanksgiving, and that means it's time for...football!

Ethan has waited his whole nine-year-old life to be old enough to play in the annual family Turkey Bowl football game. This is his year. He wakes up Thanksgiving Day, dresses in all of his football finest, and runs downstairs to greet the team -- his whole family.

But the kitchen isn't full of aunts and cousins and uncles -- a blizzard has snowed them out. And it looks like the Turkey Bowl just isn't meant to be this year. After all, who could play football in a blizzard?

Ethan, that's who!
Phil Bildner is a former New York City public school teacher who lives in Newburgh, New York. He spends much of his year visiting schools and libraries around the country and world. He is the author of over twenty books including the middle grade novel A Whole New Ballgame and picture books Marvelous Cornelius, The Soccer Fence, The Hallelujah Flight, and Twenty-One Elephants. Along with Loren Long, he is the coauthor of the New York Times bestselling Sluggers series. Visit him online at PhilBildner.com.