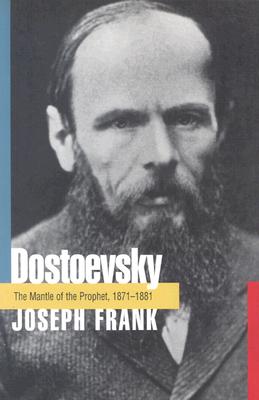 This fifth and final volume of Joseph Frank's justly celebrated literary and cultural biography of Dostoevsky renders with a rare intelligence and grace the last decade of the writer's life, the years in which he wrote A Raw Youth, Diary of a Writer, and his crowning triumph: The Brothers Karamazov.

Dostoevsky's final years at last won him the universal approval toward which he had always aspired. While describing his idiosyncratic relationship to the Russian state, Frank also details Doestoevsky's continuing rivalries with Turgenev and Tolstoy. Dostoevsky's appearance at the Pushkin Festival in June 1880, which preceded his death by one year, marked the apotheosis of his career--and of his life as a spokesman for the Russian spirit. There he delivered his famous speech on Pushkin before an audience stirred to a feverish emotional pitch: Ours is universality attained not by the sword, but by the force of brotherhood and of our brotherly striving toward the reunification of mankind. This is the Dostoevsky who has entered the patrimony of world literature, though he was not always capable of living up to such exalted ideals. The writer's death in St. Petersburg in January of 1881 concludes this unparalleled literary biography--one truly worthy of Dostoevsky's genius and of the remarkable time and place in which he lived.
Joseph Frank is Professor of Comparative Literature Emeritus at Princeton University and Professor of Comparative Literature and Slavic Languages and Literature Emeritus at Stanford University. Previous volumes of Dostoevsky have received the National Book Critics Circle Award for Biography, two Christian Gauss Awards, two James Russell Lowell Awards of the Modern Language Association, a Los Angeles Times Book Prize, and other honors. In addition to the previous volumes of Dostoevsky, Frank is the author of Through the Russian Prism: Essays on Literature and Culture (Princeton), The Widening Gyre, and The Idea of Spatial Form.