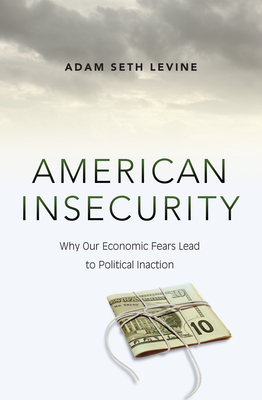 
Not On Our Shelves—Ships in 1-5 Days
Americans today face no shortage of threats to their financial well-being, such as job and retirement insecurity, health care costs, and spiraling college tuition. While one might expect that these concerns would motivate people to become more politically engaged on the issues, this often doesn't happen, and the resulting inaction carries consequences for political debates and public policy. Moving beyond previously studied barriers to political organization, American Insecurity sheds light on the public's inaction over economic insecurities by showing that the rhetoric surrounding these issues is actually self-undermining. By their nature, the very arguments intended to mobilize individuals-asking them to devote money or time to politics-remind citizens of their economic fears and personal constraints, leading to undermobilization and nonparticipation.Adam Seth Levine explains why the set of people who become politically active on financial insecurity issues is therefore quite
narrow. When money is needed, only those who care about the issues but are not personally affected become involved. When time is needed, participation is limited to those not personally affected or those who are personally affected but outside of the labor force with time to spare. The latter explains why it is relatively easy to mobilize retirees on topics that reflect personal financial concerns, such as Social Security and Medicare. In general, however, when political representation requires a large group to make their case, economic insecurity threats are uniquely disadvantaged.Scrutinizing the foundations of political behavior, American Insecurity offers a new perspective on collective participation.

Adam Seth Levine is an assistant professor in the Department of Government at Cornell University. He has published in a variety of outlets such as the Journal of Politics, Political Analysis, Review of Behavioral Economics, and Political Communication. His work has won numerous awards, including the 2011 E. E. Schattschneider Prize. This prize is the highest dissertation award in the field of American government and is given annually by the American Political Science Association