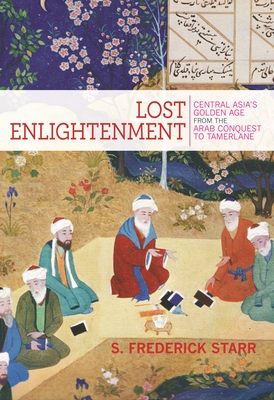 In this sweeping and richly illustrated history, S. Frederick Starr tells the fascinating but largely unknown story of Central Asia's medieval enlightenment through the eventful lives and astonishing accomplishments of its greatest minds--remarkable figures who built a bridge to the modern world. Because nearly all of these figures wrote in Arabic, they were long assumed to have been Arabs. In fact, they were from Central Asia--drawn from the Persianate and Turkic peoples of a region that today extends from Kazakhstan southward through Afghanistan, and from the easternmost province of Iran through Xinjiang, China. Lost Enlightenment recounts how, between the years 800 and 1200, Central Asia led the world in trade and economic development, the size and sophistication of its cities, the refinement of its arts, and, above all, in the advancement of knowledge in many fields. Central Asians achieved signal breakthroughs in astronomy, mathematics, geology, medicine, chemistry, music, social science, philosophy, and theology, among other subjects. They gave algebra its name, calculated the earth's diameter with unprecedented precision, wrote the books that later defined European medicine, and penned some of the world's greatest poetry. One scholar, working in Afghanistan, even predicted the existence of North and South America--five centuries before Columbus. Rarely in history has a more impressive group of polymaths appeared at one place and time. No wonder that their writings influenced European culture from the time of St. Thomas Aquinas down to the scientific revolution, and had a similarly deep impact in India and much of Asia. Lost Enlightenment chronicles this forgotten age of achievement, seeks to explain its rise, and explores the competing theories about the cause of its eventual demise. Informed by the latest scholarship yet written in a lively and accessible style, this is a book that will surprise general readers and specialists alike.
S. Frederick Starr is founding chairman of the Central Asia-Caucasus Institute & Silk Road Studies Program, a research and policy center affiliated with the Johns Hopkins School of Advanced International Studies and the Institute for Security and Development Policy in Stockholm. A past president of Oberlin College and the Aspen Institute, he began his career in classical archaeology, excavating at Gordium in modern Turkey and mapping the Persian Royal Road.