Professor of Apocalypse: The Many Lives of Jacob Taubes (Hardcover) 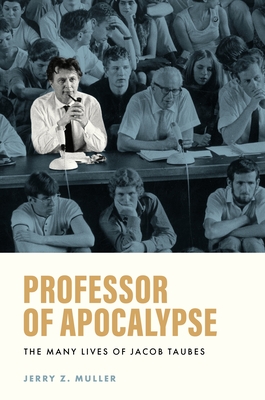 Professor of Apocalypse: The Many Lives of Jacob Taubes (Hardcover)

Scion of a distinguished line of Talmudic scholars, Jacob Taubes (1923-1987) was an intellectual impresario whose inner restlessness led him from prewar Vienna to Zurich, Israel, and Cold War Berlin. Regarded by some as a genius, by others as a charlatan, Taubes moved among yeshivas, monasteries, and leading academic institutions on three continents. He wandered between Judaism and Christianity, left and right, piety and transgression. Along the way, he interacted with many of the leading minds of the age, from Leo Strauss and Gershom Scholem to Herbert Marcuse, Susan Sontag, and Carl Schmitt. Professor of Apocalypse is the definitive biography of this enigmatic figure and a vibrant mosaic of twentieth-century intellectual life. Jerry Muller shows how Taubes's personal tensions mirrored broader conflicts between religious belief and scholarship, allegiance to Jewish origins and the urge to escape them, tradition and radicalism, and religion and politics. He traces Taubes's emergence as a prominent interpreter of the Apostle Paul, influencing generations of scholars, and how his journey led him from crisis theology to the Frankfurt School, and from a radical Hasidic sect in Jerusalem to the center of academic debates over Gnosticism, secularization, and the revolutionary potential of apocalypticism. Professor of Apocalypse offers an unforgettable account of an electrifying world of ideas, focused on a charismatic personality who thrived on controversy and conflict.
Jerry Z. Muller is professor emeritus of history at the Catholic University of America and the author of several books, including The Mind and the Market and Capitalism and the Jews (Princeton). His work has appeared in Foreign Affairs, the New York Times, the Wall Street Journal, and other leading publications. He lives in Silver Spring, Maryland. Twitter @jerryzmuller