Unfabling the East: The Enlightenment's Encounter with Asia (Hardcover) 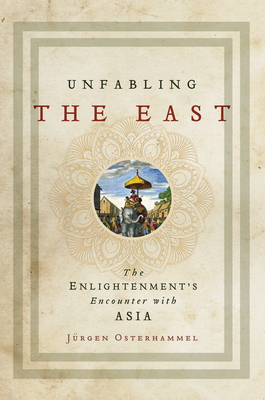 Unfabling the East: The Enlightenment's Encounter with Asia (Hardcover)

During the long eighteenth century, Europe's travelers, scholars, and intellectuals looked to Asia in a spirit of puzzlement, irony, and openness. In this panoramic and colorful book, J rgen Osterhammel tells the story of the European Enlightenment's nuanced encounter with the great civilizations of the East, from the Ottoman Empire and India to China and Japan. Here is the acclaimed book that challenges the notion that Europe's formative engagement with the non-European world was invariably marred by an imperial gaze and presumptions of Western superiority. Osterhammel shows how major figures such as Leibniz, Voltaire, Gibbon, and Hegel took a keen interest in Asian culture and history, and introduces lesser-known scientific travelers, colonial administrators, Jesuit missionaries, and adventurers who returned home from Asia bearing manuscripts in many exotic languages, huge collections of ethnographic data, and stories that sometimes defied belief. Osterhammel brings the sights and sounds of this tumultuous age vividly to life, from the salons of Paris and the lecture halls of Edinburgh to the deserts of Arabia, the steppes of Siberia, and the sumptuous courts of Asian princes. He demonstrates how Europe discovered its own identity anew by measuring itself against its more senior continent, and how it was only toward the end of this period that cruder forms of Eurocentrism--and condescension toward Asia--prevailed. A momentous work by one of Europe's most eminent historians, Unfabling the East takes readers on a thrilling voyage to the farthest shores, bringing back vital insights for our own multicultural age.