Two Buddhas Seated Side by Side: A Guide to the Lotus Sūtra (Hardcover) 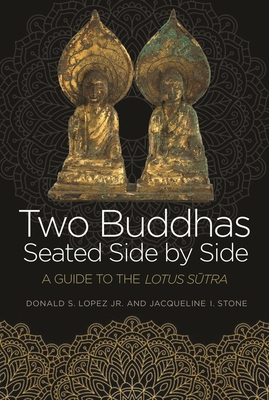 Two Buddhas Seated Side by Side: A Guide to the Lotus Sūtra (Hardcover)

An essential companion to a timeless spiritual classic

The Lotus Sūtra is among the most venerated scriptures of Buddhism. Composed in India some two millennia ago, it asserts the potential for all beings to attain supreme enlightenment. Donald Lopez and Jacqueline Stone provide an essential reading companion to this inspiring yet enigmatic masterpiece, explaining how it was understood by its compilers in India and, centuries later in medieval Japan, by one of its most influential proponents. In this illuminating chapter-by-chapter guide, Lopez and Stone show how the sūtra's anonymous authors skillfully reframed the mainstream Buddhist tradition in light of a new vision of the path and the person of the Buddha himself, and examine how the sūtra's metaphors, parables, and other literary devices worked to legitimate that vision. They go on to explore how the Lotus was interpreted by the Japanese Buddhist master Nichiren (1222-1282), whose inspired reading of the book helped to redefine modern Buddhism. In doing so, Lopez and Stone demonstrate how readers of sacred works continually reinterpret them in light of their own unique circumstances. An invaluable guide to an incomparable spiritual classic, this book unlocks the teachings of the Lotus for modern readers while providing insights into the central importance of commentary as the vehicle by which ancient writings are given contemporary meaning.
Donald S. Lopez Jr. is the Arthur E. Link Distinguished University Professor of Buddhist and Tibetan Studies at the University of Michigan. His books include The Lotus Sūtra: A Biography (Princeton). He lives in Ann Arbor, Michigan. Jacqueline I. Stone is professor of religion at Princeton University. Her books include Original Enlightenment and the Transformation of Medieval Japanese Buddhism. She lives in Kingston, New Jersey.