How Birds Evolve: What Science Reveals about Their Origin, Lives, and Diversity (Hardcover) 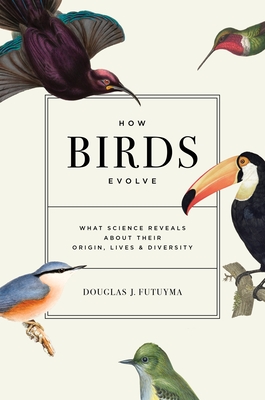 How Birds Evolve: What Science Reveals about Their Origin, Lives, and Diversity (Hardcover)

A marvelous journey into the world of bird evolution

How Birds Evolve explores how evolution has shaped the distinctive characteristics and behaviors we observe in birds today. Douglas Futuyma describes how evolutionary science illuminates the wonders of birds, ranging over topics such as the meaning and origin of species, the evolutionary history of bird diversity, and the evolution of avian reproductive behaviors, plumage ornaments, and social behaviors. In this multifaceted book, Futuyma examines how birds evolved from nonavian dinosaurs and reveals what we can learn from the "family tree" of birds. He looks at the ways natural selection enables different forms of the same species to persist, and discusses how adaptation by natural selection accounts for the diverse life histories of birds and the rich variety of avian parenting styles, mating displays, and cooperative behaviors. He explains why some parts of the planet have so many more species than others, and asks what an evolutionary perspective brings to urgent questions about bird extinction and habitat destruction. Along the way, Futuyma provides an insider's perspective on how biologists practice evolutionary science, from studying the fossil record to comparing DNA sequences among and within species. A must-read for bird enthusiasts and curious naturalists, How Birds Evolve shows how evolutionary biology helps us better understand birds and their natural history, and how the study of birds has informed all aspects of evolutionary science since the time of Darwin.
Douglas Futuyma is Distinguished Professor Emeritus in the Department of Ecology and Evolution at Stony Brook University, State University of New York. His books include Evolution and Science on Trial: The Case for Evolution. He is a member of the American Academy of Arts and Sciences and the National Academy of Sciences.