How Growth Really Happens: The Making of Economic Miracles Through Production, Governance, and Skills (Paperback) 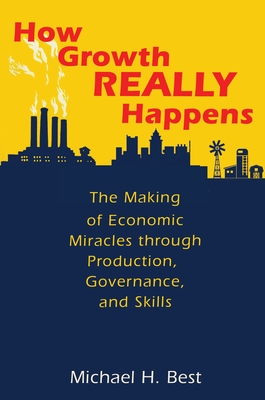 How Growth Really Happens: The Making of Economic Miracles Through Production, Governance, and Skills (Paperback)

A groundbreaking study that shows how countries can create innovative, production-based economies for the twenty-first century

Achieving economic growth is one of today's key challenges. In this groundbreaking book, Michael Best argues that to understand how successful growth happens we need an economic framework that focuses on production, governance, and skills. This production-centric framework is the culmination of three simultaneous journeys. The first has been Best's visits to hundreds of factories worldwide, starting early as the son of a labor organizer and continuing through his work as an academic and industrial consultant. The second is a survey of two hundred years of economic thought from Babbage to Krugman, with stops along the way for Marx, Marshall, Young, Penrose, Richardson, Schumpeter, Kuznets, Abramovitz, Keynes, and Jacobs. The third is a tour of historical episodes of successful and failed transformations, focusing sharply on three core elements--the production system, business organization, and skill formation--and their interconnections. Best makes the case that government should create the institutional infrastructures needed to support these elements and their interconnections rather than subsidize individual enterprises. The power of Best's alternative framework is illustrated by case studies of transformative experiences previously regarded as economic miracles: America's World War II industrial buildup, Germany's postwar recovery, Greater Boston's innovation system, Ireland's tech-sector boom, and the rise of the Asian Tigers and China. Accessible and engaging, How Growth Really Happens is required reading for anyone who wants to advance today's crucial debates about industrial policy, climate change, globalization, technological change, and the future of work.
Michael H. Best is professor emeritus of economics at the University of Massachusetts, and has worked on production restructuring projects with the United Nations Industrial Development Organization, the World Bank, and governments in twelve countries. He is the author of The New Competition and The New Competitive Advantage