The Walls Around Opportunity: The Failure of Colorblind Policy for Higher Education (Our Compelling Interests #6) (Hardcover) 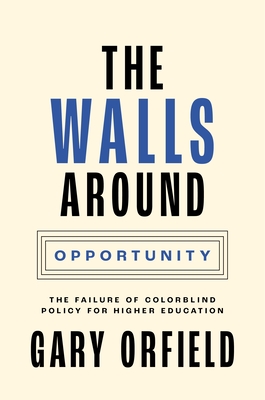 The Walls Around Opportunity: The Failure of Colorblind Policy for Higher Education (Our Compelling Interests #6) (Hardcover)

In our unequal society, families of color fully share the dream of college but their children often attend schools that do not prepare them, and the higher education system gives the best opportunities to the most privileged. Students of color hope for college but often face a dead end.
For many young people, racial inequality puts them at a disadvantage from early childhood. The Walls around Opportunity argues that colorblind policies have made college inaccessible to a large share of students of color, and reveals how policies that acknowledge racial inequalities and set racial equality goals can succeed where colorblindness has failed. Gary Orfield paints a troubling portrait of American higher education, explaining how profound racial gaps imbedded in virtually every stage of our children's lives pose a major threat to communities of color and the nation. He describes how the 1960s and early 1970s was the only period in history to witness sustained efforts at racial equity in higher education, and how the Reagan era ushered in today's colorblind policies, which ignore the realities of color inequality. Orfield shows how this misguided policy has resegregated public schools, exacerbated inequalities in college preparation, denied needed financial aid to families, and led to huge price increases over decades that have seen little real gain in income for most Americans. Drawing on a wealth of new data and featuring commentaries by Stella Flores and James Anderson, this timely and urgent book shows how colorblind policies serve only to raise the walls of segregation higher, and proposes real solutions that can make higher education available to all.
Gary Orfield is professor of education, law, political science, and urban planning at the University of California, Los Angeles, where he codirects the Civil Rights Project, one of the nation's leading centers for civil rights research. His many books include Educational Delusions? and Dismantling Desegregation. Twitter @orfieldtweet