And Still the Waters Run: The Betrayal of the Five Civilized Tribes (Paperback) 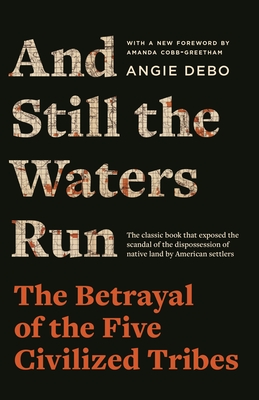 And Still the Waters Run: The Betrayal of the Five Civilized Tribes (Paperback)

And Still the Waters Run tells the tragic story of the liquidation of the independent Indian republics of the Choctaws, Chickasaws, Cherokees, Creeks, and Seminoles, known as the Five Civilized Tribes. At the turn of the twentieth century, the tribes owned the eastern half of what is now Oklahoma, a territory immensely wealthy in farmland, forests, coal, and oil. Their political and economic status was guaranteed by the federal government--until American settlers arrived. Congress abrogated treaties that it had promised would last "as long as the waters run," and within a generation, the tribes were systematically stripped of their holdings, and were rescued from starvation only through public charity. Called a "work of art" by writer Oliver La Farge, And Still the Waters Run was so controversial when it was first published that Angie Debo was banned from teaching in Oklahoma for many years. Now with an incisive foreword by Amanda Cobb-Greetham, here is the acclaimed book that first documented the scandalous founding of Oklahoma on native land.
Angie Debo (1890-1988) was a writer, lecturer, and historian whose many books include Geronimo: The Man, His Time, His Place; The Road to Disappearance: A History of the Creek Indians; and The Rise and Fall of the Choctaw Republic. Amanda Cobb-Greetham is professor of Native American studies and founding director of the Native Nations Center at the University of Oklahoma.