A Minor Malevolent Spirit and Other Tales (Paperback) 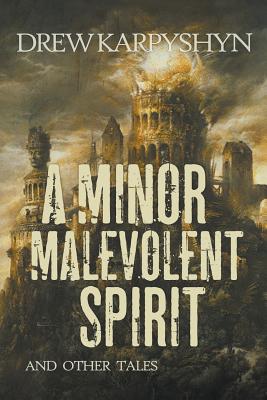 A Minor Malevolent Spirit and Other Tales (Paperback)


Not On Our Shelves—Ships in 1-5 Days
(This book cannot be returned.)
New York Times bestselling author Drew Karpyshyn spins ten fantastical tales of magic, mystery and the supernatural with his usual gift for world building and imagination. A man discovers a demon living in his basement, then hires it to advance his career. A young king in exile challenges a powerful wizard in a battle of wits to reclaim his throne. The Aztec pantheon gathers for an unusual contest to win the favor of the immortal Serpent King. A proud warrior queen plots bloody retribution to avenge her murdered family. With stories ranging from classic sword and sorcery adventures to contemporary horror to twisted takes on myth, legend and folklore, A Minor Malevolent Spirit delivers thrills, chills and even some laughs. As an added bonus, author notes for each of the ten stories examine Karpyshyn's creative process and the craft of writing, giving fans a unique glimpse inside the mind of the acclaimed storyteller.
Karpyshyn is the New York Times bestselling author of thirteen books, including the Chaos Born epic fantasy trilogy: Children of Fire, The Scorched Earth, and Chaos Unleashed. He has written five Star Wars novels, including the Darth Bane trilogy: Path of Destruction, Rule of Two, and Dynasty of Evil. As a writer/designer with BioWare, he worked on numerous award-winning videogames and also penned the acclaimed Mass Effect book series. After spending most of his life in Canada, he finally grew tired of the long, cold winters and headed south in search of a climate more conducive to year-round golf. He now lives in Texas with his wife, Jennifer, and their pets. He can be reached through his Twitter account @DrewKarpyshyn or through his website at www.drewkarpyshyn.com.