Where Do You Think You're Going, Christopher Columbus? (Paperback) 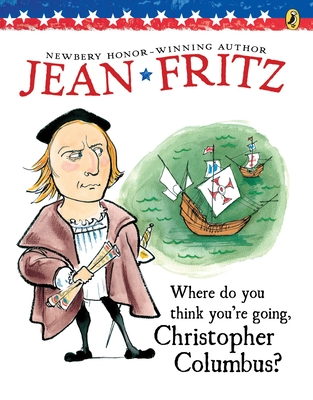 Where Do You Think You're Going, Christopher Columbus? (Paperback)


Special Order—Subject to Availability
Newbery Honor author Jean Fritz takes us on a historic tour of Christopher Colubus! "In a simple, short biography of Columbus she has been extraordinarily successful in extracting the essence of the man."—The Horn Book


Christopher Columbus thought he knew where he was going. He had planned to be the first to cross the ocean and reach the rich lands of the Indies. And when he returned to Spain, he insisted to everyone who would listen that he'd succeeded. But that wasn't exactly true. Little did Columbus know that his mistake would come to be known as America!

"Fritz's unconventional look at the great explorer who accidently discovered the New World reveals the navigator's obstinate as well as his visionary side."—School Library Journal
Acclaimed biographer, Jean Fritz, was born in China to American missionaries on November 16, 1915. Living there until she was almost thirteen sparked a lifelong interest in American history.  She wrote about her childhood in China in Homesick, My Own Story, a Newbery Honor Book and winner of the National Book Award.
Ms. Fritz was the author of forty-five books for children and young people. Many center on historical American figures, gaining her a reputation as the premier author of biographies for children and young people.
Among the other prestigious awards Ms. Fritz has garnered are: the National Humanities Medal, the Children's Literature Legacy Award, the May Hill Arbuthnot Lecture Award. the Christopher Award, the Boston Globe-Horn Book Non-Fiction Award, a New York Times Notable Book of the Year, and many ALA Notable Books of the Year, School Library Journal Best Books of the Year, and ALA Booklist Editors’ Choice Awards.
She passed away on May 14, 2017.
Praise for WHERE DO YOU THINK YOU'RE GOING, CHRISTOPHER COLUMBUS?