The Soviet-Afghan War: How a Superpower Fought and Lost (Modern War Studies) (Paperback) 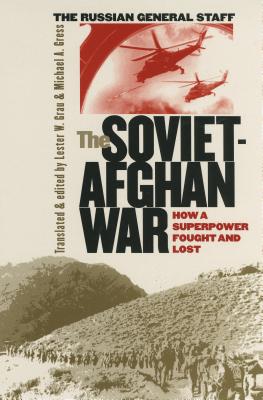 The Soviet-Afghan War: How a Superpower Fought and Lost (Modern War Studies) (Paperback)


Not On Our Shelves—Ships in 1-5 Days
The War in Afghanistan (1979-1989) has been called the Soviet Union's Vietnam War, a conflict that pitted Soviet regulars against a relentless, elusive, and ultimately unbeatable Afghan guerrilla force (the mujahideen). The hit-and-run bloodletting across the war's decade tallied more than 25,000 dead Soviet soldiers plus a great many more casualties and further demoralized a USSR on the verge of disintegration. In The Soviet-Afghan War the Russian general staff takes a close critical look at the Soviet military's disappointing performance in that war in an effort to better understand what happened and why and what lessons should be taken from it. Lester Grau and Michael Gress's expert English translation of the general staff's study offers the very first publication in any language of this important and illuminating work. Surprisingly, this was a study the general staff never intended to write, initially viewing the war in Afghanistan as a dismal aberration in Russian military history. The history of the 1990s has, of course, completely demolished that belief, as evidenced by the Russian Army's subsequent engagements with guerrilla forces in Chechnya, Azerbaijan, Tadjikistan, Turkmenistan, and elsewhere. As a result, Russian officers decided to take a much closer look at the Red Army's experiences in the Afghan War. Their study presents the Russian view of how the war started, how it progressed, and how it ended; shows how a modern mechanized army organized and conducted a counter-guerrilla war; chronicles the major battles and operations; and provides valuable insights into Soviet tactics, strategy, doctrine, and organization across a wide array of military branches. The editors' incisive preface and commentary help contextualize the Russian view and alert the reader to blind spots in the general staff's thinking about the war. This one-of-a-kind document provides a powerful case study on how yet another modern mechanized army imprudently relied upon the false promise of technology to defeat a determined guerrilla foe. Along the way, it vividly reveals the increasing disillusionment of Soviet soldiers, how that disillusion seeped back into Soviet society, and how it contributed to the collapse of the Soviet Union. The Red Army had fought their war to a military draw but that was not enough to stave off political defeat at home. The Soviet-Afghan War helps clarify how such a surprising demise could have materialized in the backyard of the Cold War's other great superpower.