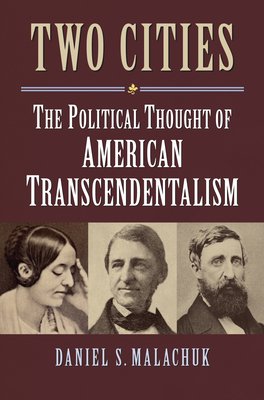 
Special Order—Subject to Availability
Since the late eighteenth century the ideals of political democracy and individual flourishing have become so entangled that most people no longer differentiate them. The American Transcendentalists did. Two Cities is the first comprehensive account of the original but still underrated political thought of this movement, especially that of its three major authors: Ralph Waldo Emerson, Margaret Fuller, and Henry David Thoreau. For decades, Daniel S. Malachuk contends, readers have misinterpreted the Transcendentalists as worshipping democracy and secularizing personhood. Two Cities proves the opposite. Focusing on their major writings, Malachuk presents the Transcendentalists as wresting apart and thus clarifying democracy as a profane project and individuality as a sacred one. Building upon this basic insight, the book affirms many recent but discrete conclusions about the movement's various contributions (especially to liberalism, environmentalism, and public religion) and shows that we will understand how these commitments hang together only when we "re-transcendentalize the Transcendentalists." In five useful chapters--on the two-cities tradition within the history of liberalism, on the rival and subsequently dominant "overlap" theories of Lincoln and others, and on the unique contributions to two-cities thought by each of the major authors--Two Cities reintroduces readers to the Transcendentalists as among the most original and important contributors to American political thought.