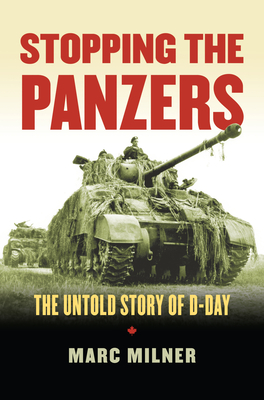 
Not On Our Shelves—Ships in 1-5 Days
Brigadier General James L. Collins Jr. Book Prize In the narrative of D-Day the Canadians figure chiefly--if at all--as an ineffective force bungling their part in the early phase of Operation Overlord. The reality is quite another story. As both the Allies and the Germans knew, only Germany's Panzers could crush Overlord in its tracks. The Canadians' job was to stop the Panzers--which, as this book finally makes clear, is precisely what they did. Rescuing from obscurity one of the least understood and most important chapters in the history of D-Day, Stopping the Panzers is the first full account of how the Allies planned for and met the Panzer threat to Operation Overlord. As such, this book marks nothing less than a paradigm shift in our understanding of the Normandy campaign. Beginning with the Allied planning for Operation Overlord in 1943, historian Marc Milner tracks changing and expanding assessments of the Panzer threat, and the preparations of the men and units tasked with handling that threat. Featured in this was the 3rd Canadian Division, which, treated so dismissively by history, was actually the most powerful Allied formation to land on D-Day, with a full armored brigade and nearly 300 artillery and antitank guns under command. Milner describes how, over four days of intense and often brutal battle, the Canadians fought to a literal standstill the 1st SS Panzer Corps--which included the Wehrmacht's 21st Panzer Division; its vaunted elite Panzer Lehr Division; and the rabidly zealous 12th SS Hitler Youth Panzer Division, whose murder of 157 Canadian POWs accounted for nearly a quarter of Canadian fatalities during the fighting. Stopping the Panzers sets this murderous battle within the wider context of the Overlord assault, offering a perspective that challenges the conventional wisdom about Allied and German combat efficiency, and leads to one of the freshest assessments of the D-Day landings and their pre-attack planning in more than a decade.