The Election of the Evangelical: Jimmy Carter, Gerald Ford, and the Presidential Contest of 1976 (Hardcover) 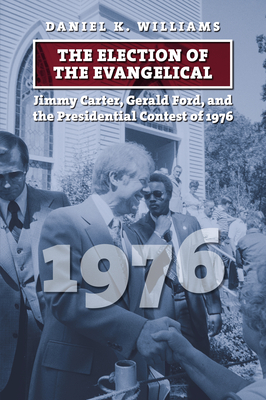 The Election of the Evangelical: Jimmy Carter, Gerald Ford, and the Presidential Contest of 1976 (Hardcover)


Not On Our Shelves—Ships in 1-5 Days
From where we stand now, the election of 1976 can look like an alternate reality: southern white evangelicals united with African Americans, northern Catholics, and Jews in support of a Democratic presidential candidate; the Republican candidate, a social moderate whose wife proudly proclaimed her support for Roe v. Wade, was able to win over Great Plains farmers as well as cultural liberals in Oregon, California, Connecticut, and New Jersey--even as he lost Ohio, Texas, and nearly the entire South. The Election of the Evangelical offers an unprecedented, behind-the-headlines analysis of this now almost unimaginable political moment, which proved to be a pivotal turning point in polarizing American political parties along ideological and cultural lines and eventually in destroying the winning coalition that Jimmy Carter created. The big story immediately following the election was that a self-described evangelical Christian and improbably dark-horse candidate from the Deep South had won the presidency, leading Newsweek to call 1976 the "year of the evangelical." What pundits overlooked at the time, and what Daniel K. Williams delves into in this book, was the profound effect of the election on the nation (TM)s political parties. In the first comprehensive historical study of this consequential election, Williams mines untapped archival materials to uncover the strategies of the Ford, Carter, and Reagan campaigns and Republican and Democratic leaders in 1976. His work explains why, despite Ford's and Carter's efforts to the contrary, the 1976 presidential election reshaped the political parties along ideologically polarized lines. As he examines the role that religion and "values voting" played in 1976, Williams reveals why Carter was the last Democrat to hold together a New Deal style coalition of white southern evangelicals, northern Catholics, and African Americans. His findings dispel the most common myths about why Ford lost the election and clarify what his defeat meant for the future of the Republican Party. An eye-opening account of electoral politics at an epochal crossroads, this book provides valuable historical perspective and critical insight in a time of seemingly ever-increasing partisan polarization in American political life.