American by Birth: Wong Kim Ark and the Battle for Citizenship (Abridged / Paperback) 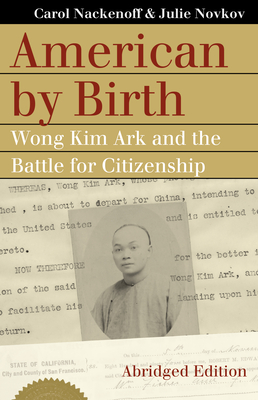 American by Birth: Wong Kim Ark and the Battle for Citizenship (Abridged / Paperback)


Special Order—Subject to Availability
In this abridged edition for the Landmark Law Cases and American Society series American by Birth is now available in a format designed for students and general readers and includes a chronology outlining the key points in the case plus a bibliographical essay. American by Birth explores the history and legacy of Wong Kim Ark and the 1898 Supreme Court case that bears his name, which established the automatic citizenship of individuals born within the geographic boundaries of the United States. In the late nineteenth century, much like the present, the United States was a difficult, and at times threatening, environment for people of color. Chinese immigrants, invited into the United States in the 1850s and 1860s as laborers and merchants, faced a wave of hostility that played out in organized private violence, discriminatory state laws, and increasing congressional efforts to throttle immigration and remove many long-term residents. The federal courts, backed by the Supreme Court, supervised the development of an increasingly restrictive and exclusionary immigration regime that targeted Chinese people. This was the situation faced by Wong Kim Ark, who was born in San Francisco in the 1870s and who earned his living as a cook. Like many members of the Chinese community in the American West he maintained ties to China. He traveled there more than once, carrying required reentry documents, but when he attempted to return to the United States after a journey from 1894 to 1895, he was refused entry and detained. Protesting that he was a citizen and therefore entitled to come home, he challenged the administrative decision in court. Remarkably, the Supreme Court granted him victory. This victory was important for Wong Kim Ark, for the ethnic Chinese community in the United States, and for all immigrant communities then and to this day. because the Supreme Court's ruling inscribed the principle in constitutional terms and clarified that it extended even to the children of immigrants who were legally barred from becoming citizens.