Powered by Plants: Meet the trees, flowers, and vegetation that inspire our everyday technology (Designed by Nature) (Hardcover) 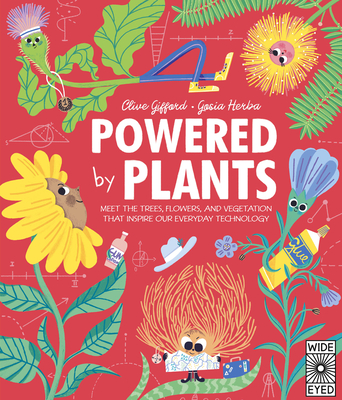 Powered by Plants: Meet the trees, flowers, and vegetation that inspire our everyday technology (Designed by Nature) (Hardcover)


Not On Our Shelves—Ships in 1-5 Days
Following on from the incredible Invented by Animals and Built by Animals, Powered by Plants introduces us to the wondrous plants whose ingenious features have inspired innovations in human technology.

Plants exhibit an incredible range of diversity in their shape, structures and how they interact with other living things and their environment. Some of this great diversity is being increasingly studied and copied, inspiring innovation in science, design, engineering, and technology.

This book guides readers through a startling collection of fascinating vegetation, from towering cottonwood trees with wind power potential to slippery, meat-eating assassins of the plant world and the fast-growing aquatic plant which helps propel ships farther using less energy. Learn surprising applications and spin-offs of both exotic species including the world’s largest flower that generates its own heat and more familiar plants such as bamboo, coconut, and maize, all depicted in colorful, engaging fashion.

Colorful and lively illustrations and pop-out fact boxes bring the science in this book to life, and Powered by Plants shows us how much we can learn from studying the myriad magnificence of the natural world.

Other fascinating books in this series are Built by Animals and Invented by Animals.

Clive Gifford has traveled to more than 70 countries, climbed rocket launch towers, ridden on robots, and flown gliders. He's had more than 200 books published and has received nominations for or won Royal Society, School Library Association, Smithsonian, and TES awards. He won the Blue Peter Book Award for Best Book with Facts 2019 for his title The Colors of History (QEB). Clive lives in Manchester, UK.

Gosia Herba is an illustrator and art historian originally from Poland. She's worked as an illustrator of children's books, graphic novels, magazines, music labels, and advertisements for over 12 years. www.gosiaherba.pl

“An introduction to the diversity in the plant world and their technological uses, from cottonwood trees with wind power potential to meat-eating assassins. Part of a series that includes Built by Animals and Invented by Animals.”—The Bookseller