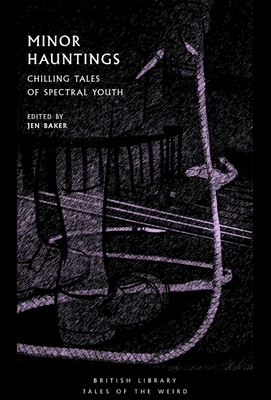 
In Stock—Click for Locations
A cradle rocking itself in a dusty chamber; an echoing giggle from somewhere upstairs; the feeling of a small hand in yours in the wilderness of a misty moor. . . .

From the haunting children of The Shining and The Grudge to Neil Gaiman’s Coraline, the ghostly youth is still one of the most recognized and feared tropes of horror fiction and film. In this spine-tingling new collection, Jen Baker gathers the most chilling tales of hauntings by children, expertly paired with snippets of the folklore and urban legends which inspired them. Truly lost stories return for the first time since their original publication along with nail-biting encounters from masters of the ghost story such as Elizabeth Gaskell, M.R. James, and Frances Hodgson Burnett.
Jen Baker is a Teaching Fellow in 19th and 20th Century Literature at the University of Warwick. Her research specialisms include monstrosity and childhood, death studies, and folklore, with a focus on the spaces in which they intersect. She is currently a convenor of research strands on "Evil" and "Children and Evil" as part of the "Evil Hub" for the interdisciplinary scholarly network Progressive Connexions.