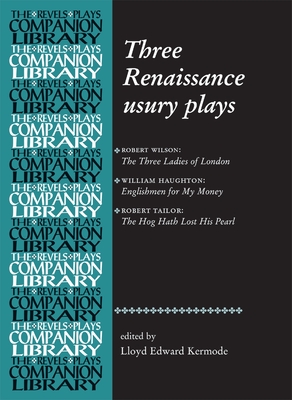 
Not On Our Shelves—Ships in 1-5 Days
This book provides for the first time modern-spelling, fully annotated editions of three important Elizabethan and Jacobean 'usury plays' - The Three Ladies of London, Englishmen for My Money, and The Hog Hath Lost His Pearl. The edition includes an extensive scholarly introduction to the attitudes toward money-lending in early modern England, and to the authors, texts and historical contexts of these dramas. The plays included in this edition also represent examples of 'city plays' and 'alien plays', thus making them widely relevant to scholars and teachers in many areas of early modern studies. They are also gaining new appreciation in their own right. As befits a volume in the RPCL series, the edition is academically advanced to cater for specialised scholars. However, the introduction, editing and annotation remain accessible for undergraduates and theatregoers.
Lloyd Edward Kermode is Professor of English at California State University, Long Beach. He is the co-editor of Tudor Drama Before Shakespeare (Palgrave) and Alien Stages