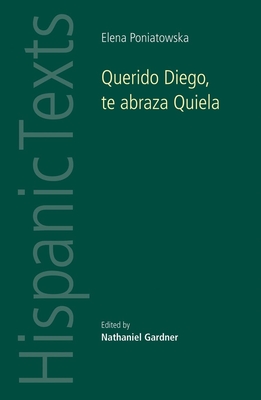 One of the threads that runs through Elena Poniatowska's oeuvre is that of foreigners who have fallen in love with Mexico and its people. This is certainly the case of Querido Diego, te abraza Quiela - a brief novel (so short it was originally published in its entirety in Octavio Paz's literary magazine Vuelta). The Russian exile and painter Angelina Beloff writes from the cold and impoverished post-war Paris to Diego Rivera, her spouse of over ten years. Beloff sends these letters to which there is no response during a time when the emancipation of women has broken many of the standard models and the protagonist struggles to fashion her own. Elena Poniatowska has (re)created these letters and within them one finds the unforgettable testimony of an artist and her lover during the valuable crossroads of a new time when Diego Rivera was forging a new life in his native country. In this edition, Nathanial Gardner comments on the truth and fiction Poniatowska has woven together to form this compact, yet rich, modern classic. Using archives in London, Paris and Mexico City (including Angelina's correspondence held in Frida Kahlo's own home) as well as interviews from the final remaining characters who knew the real Angelina, Gardner offers a mediation of the text and its historical groundings as well as critical commentary. This edition will appeal to both students and scholars of Latin American Studies as well as lovers of Mexican Literature and Art in general.