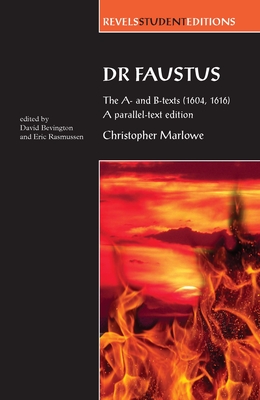 
Not On Our Shelves—Ships in 1-5 Days
Dr Faustus, first published in 1604 long after Christopher Marlowe had died (in 1593) and then published in an expanded version in 1616, has long fascinated readers and scholars alike as one of the great puzzles in Renaissance English drama. Marlowe himself was highly controversial in his own day, and remains so today, as a daringly heterodox writer. The so-called A-text of 1604 is very short, with missing and misplaced scenes. Some passages are clearly not by Marlowe, but by some other dramatist commissioned by the theatre entrepreneur Philip Henslowe to supplement Marlowe's incomparable tragic writing with some comic horseplay. The B-text adds a considerable amount of material from the Faustbook, padding out the story with more raucous comedy to satisfy audience longings for more magical stunts. This edition uniquely presents the two texts in facing pages, making the reader aware of the changing tastes of audiences, the stage history of the play, and of just how intricate 'editing' a play can be. With a concise and illuminating introduction, and relevant notes and images, this Revels Student Edition of the 'A' and 'B' texts of Dr Faustus will prove to be an enthralling document, and an excellent edition for student and theatre-goer alike.

"David Bevington and Eric Rasmussen have revolutionized the study of Marlowe's brilliant and in many ways baffling play, and this excellent edition digests two decades of complex research into a clear and readable form. Teachers and students of Elizabethan drama will find this an invaluable resource." -Professor Stephen Orgel, Stanford University

"A landmark of world drama, Doctor Faustus remains one of the foundational plays of the English Renaissance. In this thoughtfully annotated, revised edition, Rasmussen and Bevington present both of its early versions in parallel format. This is a text for students and scholars alike, as its learning gracefully clarifies Marlowe's achievement." -Douglas Bruster, University of Texas at Austin