The Man Who Solved the Market: How Jim Simons Launched the Quant Revolution (Hardcover) 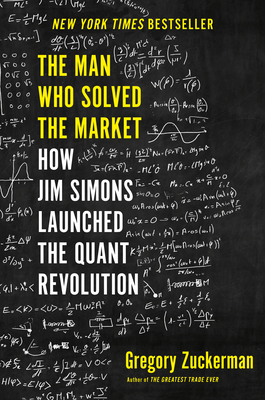 The Man Who Solved the Market: How Jim Simons Launched the Quant Revolution (Hardcover)

The unbelievable story of a secretive mathematician who pioneered the era of the algorithm--and made $23 billion doing it.

As Renaissance became a market force, its executives began influencing the world beyond finance. Simons became a major figure in scientific research, education, and liberal politics. Senior executive Robert Mercer is more responsible than anyone else for the Trump presidency, placing Steve Bannon in the campaign and funding Trump's victorious 2016 effort. Mercer also impacted the campaign behind Brexit.

The Man Who Solved the Market is a portrait of a modern-day Midas who remade markets in his own image, but failed to anticipate how his success would impact his firm and his country. It's also a story of what Simons's revolution means for the rest of us.
Gregory Zuckerman is the author of The Greatest Trade Ever and The Frackers, and is a Special Writer at the Wall Street Journal. At the Journal, Zuckerman writes about financial firms, personalities and trades, as well as hedge funds and other investing and business topics. He's a three-time winner of the Gerald Loeb award, the highest honor in business journalism. Zuckerman also appears regularly on CNBC, Fox Business and other networks and radio stations around the globe.
“Captivating.” —New York Times

“A compelling read.” —The Economist

“One of the most important stories of our time.” —Financial Times

“Zuckerman brings the reader so close to the firm’s inner workings that you can almost catch a whiff of the billionaire’s Merit cigarette.” —Brandon Kochkodin, Bloomberg

“A gripping biography of investment game changer Jim Simons… readers looking to understand how the economy got where it is should eat this up.” —Publishers Weekly

“Immensely enjoyable.” —Edward O. Thorp, author of A Man for All Markets

“An extremely well-written and engaging book . . . a must read, and a fun one at that.” —Mohamed A. El-Erian, author of The Only Game in Town