Genghis Khan and the Quest for God: How the World's Greatest Conqueror Gave Us Religious Freedom (Paperback) 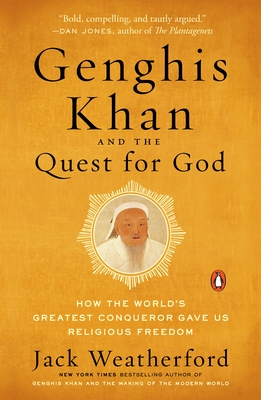 Genghis Khan and the Quest for God: How the World's Greatest Conqueror Gave Us Religious Freedom (Paperback)


Special Order—Subject to Availability
A landmark biography by the New York Times bestselling author of Genghis Khan and the Making of the Modern World that reveals how Genghis harnessed the power of religion to rule the largest empire the world has ever known.

Throughout history the world's greatest conquerors have made their mark not just on the battlefield, but in the societies they have transformed. Genghis Khan conquered by arms and bravery, but he ruled by commerce and religion. He created the world's greatest trading network and drastically lowered taxes for merchants, but he knew that if his empire was going to last, he would need something stronger and more binding than trade. He needed religion. And so, unlike the Christian, Taoist and Muslim conquerors who came before him, he gave his subjects freedom of religion. Genghis lived in the 13th century, but he struggled with many of the same problems we face today: How should one balance religious freedom with the need to reign in fanatics? Can one compel rival religions - driven by deep seated hatred--to live together in peace?

A celebrated anthropologist whose bestselling Genghis Khan and the Making of the Modern World radically transformed our understanding of the Mongols and their legacy, Jack Weatherford has spent eighteen years exploring areas of Mongolia closed until the fall of the Soviet Union and researching The Secret History of the Mongols, an astonishing document written in code that was only recently discovered. He pored through archives and found groundbreaking evidence of Genghis's influence on the founding fathers and his essential impact on Thomas Jefferson. Genghis Khan and the Quest for God is a masterpiece of erudition and insight, his most personal and resonant work.
Jack Weatherford is The New York Times bestselling author of Genghis Khan and the Making of the Modern World, Indian Givers: How the Indians of the Americas Transformed the World, The Secret History of the Mongol Queens, and The History of Money, among other acclaimed books. A specialist in tribal peoples, he was for many years a professor of anthropology at Macalaster College in Minnesota and divides his time between the United States and Mongolia.
"The conquests of the Mongols were arguably the most important event of the last millennium in Eurasia. Yet Genghis Khan has remained an opaque and enigmatic figure, a symbol of cruelty and little else. Jack Weatherford has peeled back the curtain and revealed a complex man and thinker in this path-breaking work of rousing history and scholarship."
— Robert D. Kaplan, author of The Revenge of Geography and Eastward to Tartary

“Revisionist history on a grand scale, but one as scrupulously well researched as such an intellectual overhaul needs to be…What is most remarkable about this fine and fascinating book is Weatherford’s central claim that the Great Khan’s ecumenism has as its legacy the very same rigid separation of church and state that underpins no less than the American idea itself. The United States Constitution’s First Amendment is, at its root, an originally Mongol notion…. Weatherford argues his case very well, and in doing so offers further amplification of the notion that so many of the West’s claimed achievements in fact have their true origins in the East.”
— Simon Winchester, New York Times Book Review

“Genghis Khan, the Mongol warrior who conquered swaths of Central and Eastern Asia in the early thirteenth century, is not commonly considered a paragon of tolerance. But this account of the laws and customs of his court presents a figure who not only believed in freedom of religion but pioneered its implementation. Faced with unifying an empire that encompassed numerous warring religions, the Mongols crafted policies that, Weatherford argues, influenced the architects of the U.S. Constitution…Analysis of Khan’s thought bolsters the claim, and adds a welcome dimension to a misunderstood figure.”
— The New Yorker

“It's an unexpected connection, that of Genghis Khan — one of the bloodiest, most ruthless imperialists the world has ever seen — and the concept that people, including and perhaps especially conquered populations, should be allowed to practice the religion of their choice. This idea, born of the wily Mongol's shrewd perception that the gift of religious liberty could extend the life of his empire far longer than enforced conversion, in turn influenced generations of thinkers, including the American Founding Fathers and, in particular, Thomas Jefferson.” — Chicago Tribune
“Few contemporary writers have Weatherford’s talent for making the deep sweep of history seem vital and immediate.”
— Washington Post

"Weatherford tells the gripping story of how a man rose from nothing to control almost all the known world. That the Mongol conqueror Genghis Khan, the ultimate self-made man, was also the founder of religious liberty is only one of many surprises in this well-researched and well-written book. Through meticulous scholarship, Jack Weatherford has found tangible echoes of the Founding Fathers’ promotion of complete religious tolerance in the thinking of Genghis Khan.”
— Andrew Roberts, author of Napoleon

“Genghis Khan is best remembered by Voltaire’s description: a ‘cruel tyrant King of Kings’, who butchered and brutalised his way across the medieval world. But in this elegant, original and scrupulously researched book, Jack Weatherford makes the case for a Mongolian warlord as first mover behind the First Amendment freedoms millions of Americans enjoy today. Bold, compelling and tautly argued, this is another fine study of a subject Weatherford knows better than anyone else writing today.”
— Dan Jones, author of The Plantagenets

“Jack Weatherford returns to Genghis Khan and offers a startling conclusion: that the Western tradition of secularism in fact was enhanced by the religious tolerance of the great Mongolian warlord. An engaging, well-researched—and counter-intuitive—intellectual odyssey.
— Victor Davis Hanson, Senior Fellow in Residence in Classics and Military History at the Hoover Institution/Stanford University and author of Carnage and Culture

“After consolidating two civilizations — and subjects from several faiths — under his rule, Khan realized religious tolerance was crucial to keeping his empire intact.” – The Editors of the New York Times Book Review, paperback row

"An engrossing history that sheds further light on a figure the West has long regarded as the ultimate barbarian."
-Booklist (starred review)

"Weatherford's study of 13th-century Mongolia reveals how Genghis harnessed the power of religion to rule the largest empire the world has ever known, and draws parallels to religious extremism today."
—Publisher's Weekly, Top 10 History Titles