I am Gandhi (Ordinary People Change the World) (Hardcover) 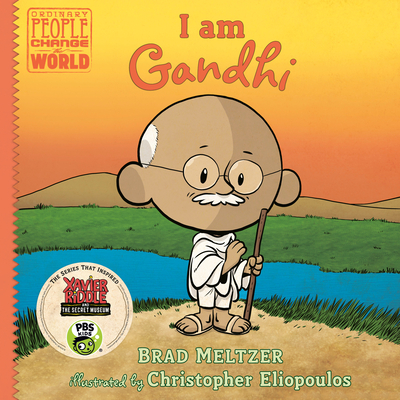 I am Gandhi (Ordinary People Change the World) (Hardcover)


Not On Our Shelves—Ships in 1-5 Days
Advocate for peace and nonviolent revolutionary Gandhi is the 12th hero in the New York Times bestselling picture book biography series for ages 5 to 8. (Cover may vary)

As a young man in India, Gandhi saw firsthand how people were treated unfairly. Refusing to accept injustice, he came up with a brilliant way to fight back through quiet, peaceful protest. He took his methods with him from South Africa back to India, where he led a nonviolent revolution that freed his country from British rule. Through his calm, steady heroism, Gandhi changed everything for India and inspired civil rights movements all over the world, proving that the smallest of us can be the most powerful.

• A timeline of key events in the hero’s history
• Photos that bring the story more fully to life
• Comic-book-style illustrations that are irresistibly adorable
• Childhood moments that influenced the hero
• Facts that make great conversation-starters
• A virtue this person embodies: Gandhi's commitment to peace is celebrated in this biography

You’ll want to collect each book in this dynamic, informative series!


Brad Meltzer is the New York Times bestselling author of Heroes for My Son, Heroes for My Daughter, The Lincoln Conspiracy, and a number of suspense novels like The Lightning Rod. He also helped find the missing 9/11 flag with his History Channel television show Brad Meltzer’s Lost History. He lives in Florida with his wife and their three children. (And did you know that a picture of Brad is hidden in every book in this series?)

Christopher Eliopoulos began his illustration career at Marvel Comics, and has worked on thousands of comics, including his own Cow Boy and Franklin Richards: Son of a Genius. He is the author and illustrator of the picture books The Yawns Are Coming! and The Giggles Are Coming! and the graphic novels Cosmic Commandos and Monster Mayhem. He lives in New Jersey with his wife and their college-graduate twin sons (who also make an appearance in each Ordinary People Change the World book).