I am Sonia Sotomayor (Ordinary People Change the World) (Hardcover) 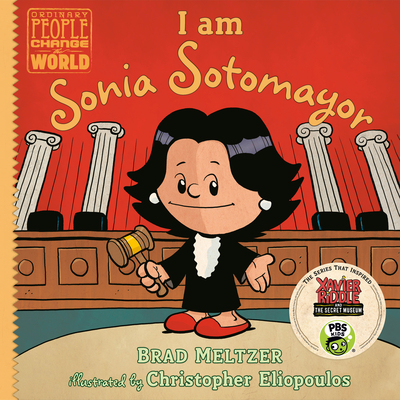 I am Sonia Sotomayor (Ordinary People Change the World) (Hardcover)


In Stock—Click for Locations
Sonia Sotomayor, the first Latina Supreme Court Justice, is the subject of the sixteenth picture book in the New York Times bestselling series of biographies about heroes. (Cover may vary)

This friendly, fun biography series focuses on the traits that made our heroes great--the traits that kids can aspire to in order to live heroically themselves. Each book tells the story of one of America's icons in a lively, conversational way that works well for the youngest nonfiction readers and that always includes the hero's childhood influences. At the back are an excellent timeline and photos. This volume features Sonia Sotomayor, the first Latina Supreme Court Justice. From her home in the Bronx to law school, Sonia Sotomayor was always driven by her love of learning and her commitment to justice. With the support of her loving family and supportive mentors, she pursued a career in law and proved there's no limit to what someone can accomplish. She was proof that opportunity comes with justice.

Included in each book are:
• A timeline of key events in the hero’s history
• Photos that bring the story more fully to life
• Comic-book-style illustrations that are irresistibly adorable
• Childhood moments that influenced the hero
• Facts that make great conversation-starters
• A virtue this person embodies: Justice Sonia Sotomayor's enthusiasm carried her through life's challenges

You’ll want to collect each book in this dynamic, informative series
Brad Meltzer is the author of the New York Times bestselling Ordinary People Change the World series for children, as well as six New York Times bestselling thrillers for adults: The Tenth Justice, Dead Even, The First Counsel, The Millionaires, The Zero Game, and The Book of Fate. He is also the #1 bestselling author of the critically acclaimed comic books Identity Crisis and Justice League of America, and is the cocreator of the TV series Jack & Bobby. A graduate of the University of Michigan and Columbia Law School, he lives in Florida. To learn more, visit bradmeltzer.com.

Christopher Eliopoulos began his illustration career as a letterer for Marvel and has worked on thousands of comics, including Franklin Richards: Son of a Genius, Pet Avengers, and Cow Boy, all of which he wrote and illustrated. He is the illustrator of the New York Times–bestselling Ordinary People Change the World series of picture book biographies. He lives in New Jersey with his wife and their identical twin sons.