Ada and the Number-Crunching Machine (Hardcover) 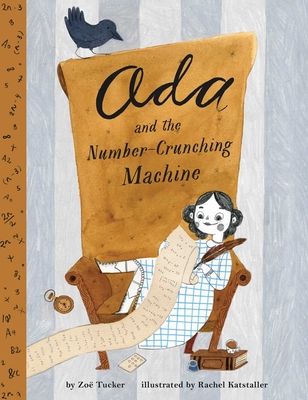 Ada and the Number-Crunching Machine (Hardcover)


Special Order—Subject to Availability
This is Ada. Although she might look like an ordinary little girl, she’s about to change the world.

Augusta Ada Byron, better known as Ada Lovelace, is an inquisitive child. Like her clever mother, she loves solving problems—big problems, little problems, and tricky, complicated problems. Ada invents crazy contraptions and reads all the books in the library of her father, the poet Lord Byron; but most of all she loves to solve mathematical problems. Together with her teacher, the mathematician Charles Babbage, Ada invents the world’s first computer program. Her achievements made her a pioneer for women in the sciences.

Rachel Katstaller is originally from tiny tropical El Salvador, where she studied Strategic Design. After a period in Montréal and New York, where she attended the Summer Residency in Illustration at the School of Visual Arts in the summer of 2014, Rachel relocated to the Alps together with her cat Hemingway. Rachel now works for several international publishing houses concentrating on children’s books and editorial illustration. She also has her own apparel brand, Las Furias.
An impressively balanced mix of engaging description and important facts with a quick explanation of the gender politics of the time and information about Ada's legacy...Inspiring, feminist, and informative in equal parts.
— Kirkus Reviews

...the volume offers an accessible introduction to her childhood and the day’s social norms.
— Publishers Weekly