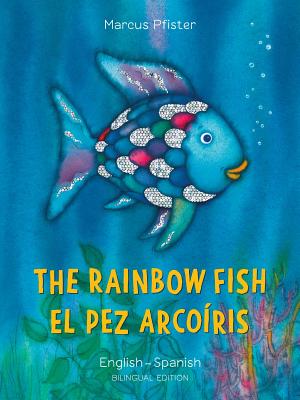 
On Our Shelves Now at:
Nothing is nicer than sharing and giving in this bilingual Spanish edition of the beloved classic by Marcus Pfister!

NorthSouth Books is proud to partner with bi:libri in a new line of multilingual children’s books.  Launching with bilingual editions of The Rainbow Fish in ten languages, and continuing with more unique titles that address universal themes, such as friendship, tolerance, and finding courage—bringing great stories and second-language learning fun to children around the world.

For over twenty-five years the little fish with the sparkling scales, who learned to conquer his vanity, has enchanted children and grown-ups all over the world.

A great way to introduce a second language to very young children, be they English- or Spanish-speaking.

WINNER OF THE BOLOGNA BOOK FAIR CRITICI IN ERBA PRIZE

Meet Marcus Pfister at www.marcuspfister.ch
Marcus Pfister was born in Bern, Switzerland. After studying at the Art School of Bern, he apprenticed as a graphic designer and worked in an advertising agency before becoming self-employed in 1984. His debut picture book, The Sleepy Owl, was published by NorthSouth in 1986, but his big breakthrough came six years later with The Rainbow Fish. Today, Marcus has illustrated over fifty books that have been translated into more than fifty languages and received countless international awards. He lives with his wife, Debora, and his children in Bern.