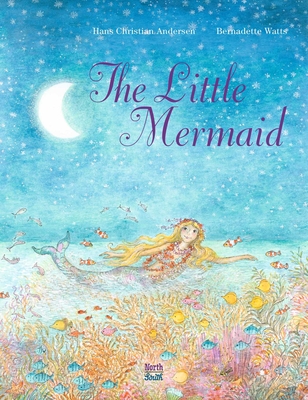 
In Stock—Click for Locations
A beloved classic illustrated by Bernadette Watts—one of Europe’s most recognized and beloved fairy-tale artists!

There is only one way the Little Mermaid can win the prince’s heart and gain an immortal soul: she must agree to the sea witch’s terrible deal—give up her voice in return for a pair of legs. But will her dream come true?

Bernadette brings to new life this world-famous, unabridged fairy tale by Hans Christian Andersen—immersing the reader in the magical world beneath the sea.
Hans Christian Andersen was born on April 2, 1805, in Odense, Denmark. A prolific writer, Andersen is best known for his fairy tales, which have been translated into more than 125 languages. By the time he died in Copenhagen in 1875, his work was known all over the world.

Bernadette Watts, known throughout Europe simply as Bernadette, has illustrated many dozens of folk- and fairy tales. Born in England, she loved to draw from childhood. She studied at the Maidstone College of Art in Kent, UK, for a time under the tutelage of Brian Wildsmith and was also taught by David Hockney. Bernadette’s many beautiful books include The Snow Queen and The Bremen Town Musicians. Bernadette finds her inspiration in nature. Today she lives and works in Kent. She has been illustrating for NorthSouth Books and NordSüd Verlag since the beginning of her career more than fifty years ago.?