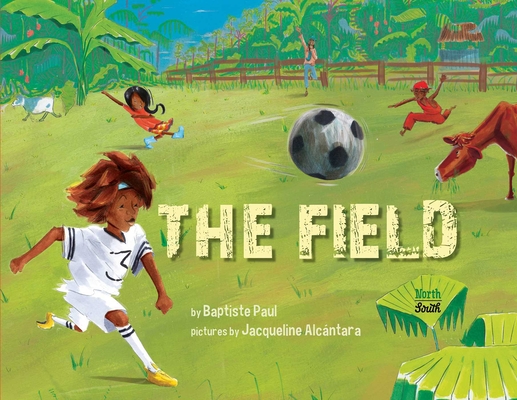 
Not On Our Shelves—Ships in 1-5 Days
Now in paperback! Soccer fan or not, the call of The Field is irresistible.

“A wonderful depiction of a joyful pastime . . . and a reminder of some of the ways we are more alike than different.”—Booklist, Starred Review


“Vini! Come! The field calls!” cries a girl as she and her younger brother rouse their community—family, friends, and the local fruit vendor—for a pick-up soccer (futbol) game. Boys and girls, young and old, players and spectators come running—bringing balls, shoes, goals, and a love of the sport.

“Friends versus friends” teams are formed, the field is cleared of cows, and the game begins! But will a tropical rainstorm threaten their plans?

The world’s most popular and inclusive sport has?found its spirited and authentic voice in Baptiste Paul’s debut picture book— highlighting the joys of the game along with its universal themes: teamwork, leadership, diversity, and acceptance. Creole words (as spoken in Saint Lucia, the author’s birthplace island in the Caribbean) add spice to the story and are a strong reminder of the sport’s world fame. Bright and brilliant illustrations by debut children’s book illustrator Jacqueline Alcántara— winner of the We Need Diverse Books Illustration Mentorship award— capture the grit and glory of the game and the beauty of the island setting that inspired this particular field.

Baptiste Paul is a children’s picture book author. His first book for NorthSouth, The Field, received 3 starred reviews and won the Sonia Lynn Sadler Award, was a Junior Library Guild selection, and also appeared on the Horn BookFanfare Best of 2018, the School Library Journal Best of 2018, and the CCBC 2018 Choices lists. Kirkus Reviews calls his new book, Peace (2021), “A visually splendid primer on peace.” Baptiste loves sports, likes to roast his own coffee, and grills. He lives in Wisconsin with his family.


Jacqueline Alcántara is a children’s picture book illustrator. Her debut picture book, The Field, written by Baptiste Paul, received 3 starred reviews and won the Sonia Lynn Sadler Award, was a Junior Library Guild selection, and also appeared on the Horn Book Fanfare Best of 2018, the School Library Journal Best of 2018, and the CCBC 2018 Choices lists. Jacqueline’s favorite days are spent drawing, painting, writing, and walking her dog. She lives in Chicago.
*STARRED REVIEW. Gather around for a boisterous game of futbol in Paul and Alcántara's excellent picture-book debut...Irresistible fun.
— Vicky Smith

The only thing you have to bring to this story is a love of good books, and a capacity to be wowed when a debut team pulls out a book as cool as this. A story so good you’ll be half tempted to pull your own soccer ball out of the shed and take it to the nearest muddy park for a spin. A true original.
— Elizabeth Bird

*STARRED REVIEW. The excitement of the game overflows from the pages and the children, from the beautiful greenery that surrounds them and the brightness of their clothing, to the dynamic movement in Alcántara’s artwork...Staccato phrases match high energy of the impromptu game.
— Booklist

*STARRED REVIEW. Vibrant illustrations, full of movement and saturated with color, match the vigor and excitement of the text.
— Martha V. Parravano

This is a wonderful debut picture book for both the author and the illustrator. It is sure to be one that will be begged for over and over again, whether soccer fan or not.
— Maria Marshall

The children’s elongated, exaggerated movements create an almost constant sense of motion in Alcántara’s vividly colored paintings, and their enthusiasm for futbol is infectious.
— Publishers Weekly