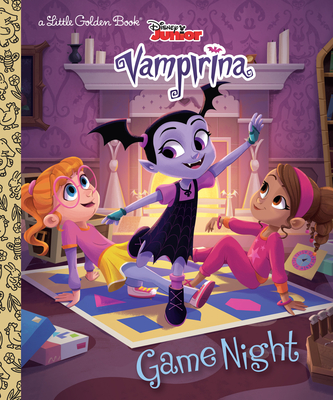 Vee invites her friends Bridget and Poppy over for game night. But will her human friends enjoy her vampire game as much as she does? Children ages 2 to 5 will love this Little Golden Book, which retells an episode of the Disney Junior series Vampirina.

Vampirina is a show that celebrates differences and all that it means to be the kid--or vampire--who dances to the beat of his or her own drum.
Judy Katschke is the bestselling author and adapter of more than 100 books for young readers, including Karate Kangaroos, A Touch of Magic, and Dinosaur: Two of a Kind. She has written numerous movie and TV tie-ins for Disney, Golden Books, Nickelodeon, and others. Judy lives in New York City.

Bill Robinson is an illustrator, character designer, animator, and visual development artist. He graduated with a BFA in Film & Animation with highest honors from the Rochester Institute of Technology in June 2006. Robinson's clients include Dreamworks, Random House Books, Little, Brown and Company, Universal, Fox Searchlight, Fisher Price, and others. You can see examples of his work at flimflammeryart.tumblr.com.