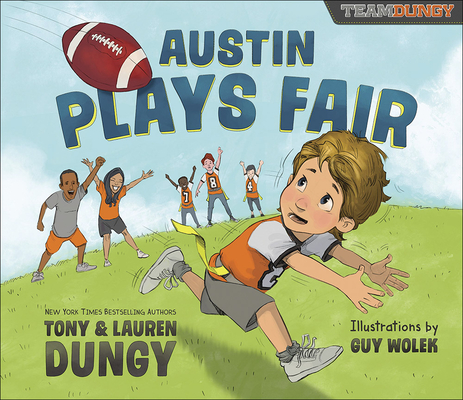 Austin loves playing flag football for the Trentwood Tigers. There is only one problem. His team has lost six games in a row, and he doesn't like losing. At his next game, Austin's teammate has a plan to trick the other team. It works, but Austin knows his team cheated to win.

Coach Tony and Coach Lauren remind Austin the most important thing about football isn't winning--it's playing fair. When his team takes the field for their next game, will Austin choose to cheat again, or will he stand up for what's right? What would you do if you were in Austin's shoes?

The Team Dungy series of picture books for young readers, ages 6-9, teaches character-building lessons through the familiar world of sports.

Tony Dungy is the #1 New York Times bestselling author of Quiet Strength and Uncommon. He enjoyed a successful career in the National Football League, winning Super Bowls as a player and as a coach. Tony is involved in numerous charities, including the Fellowship of Christian Athletes and All Pro Dad. He and his wife, Lauren, are the parents of ten children. They are active in the foster parenting community, as both parents and advocates.Lauren Dungy is the bestselling author of You Can Be a Friend and Uncommon Marriage, a frequently sought-after speaker, and an early childhood educational specialist. She is vice president of the Dungy Family Foundation, an organization committed to strengthening families and helping individuals acquire needed life skills. In addition to being a foster parent with Tony, she works with several agencies in the Tampa Bay area to help raise awareness for the foster care system.