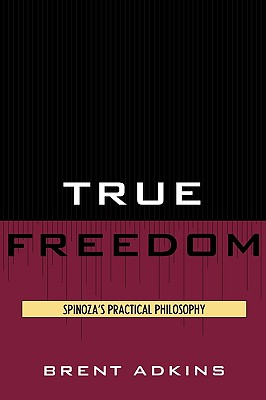 
Not On Our Shelves—Ships in 1-5 Days
True Freedom: Spinoza's Practical Philosophy is a straightforward presentation of Spinoza's philosophy focused on the issue of how one might live. The book is unique among recent Spinoza scholarship in the way in which it centers on the ethical component in Spinoza's work. In order to bring Spinoza's ethics to the fore, Brent Adkins begin with what he considers to be Spinoza's fundamental ethical insight: namely, that emotions are controlled by understanding them. Adkins reveals how the process of unfolding Spinoza's philosophy is always anchored in the very practical issue of living well. The significance of True Freedom lies in its understanding of Spinoza's ethics as an experimentalism and its accessibility to a very wide audience. Despite the fact that Spinoza died over 300 years ago, his writings remain remarkably prescient for a wide variety of disciplines, from religion to neuroscience. The source of this prescience, however, comes from Spinoza's recasting ethical theory in terms of how we might live rather than in terms of how we should live. Freedom in every aspect of life from the personal to the political to the religious is dependent on a particular way of engaging with the world. This engagement takes the form of an experiment to see if what we engage with results in an increase or a decrease in our capacity to affect and be affected by the world. True freedom, for Spinoza, lies in increasing our capacities.
Brent Adkins is associate professor of philosophy at Roanoke College.