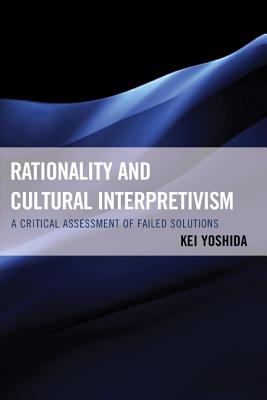 
Not On Our Shelves—Ships in 1-5 Days
Rationality and Cultural Interpretivism: A Critical Assessment of Failed Solutions critically assesses cultural interpretivism by scrutinizing five different proponents of it and their solutions to the problem of rationality. The book examines the works of Peter Winch, Charles Taylor, Clifford Geertz, Marshall Sahlins, and Gananath Obeyesekere and their contributions to the so-called rationality debate in the philosophy of the social sciences. This debate began with Winch's criticism of Edward Evans-Pritchard and has become one of the central debates in the field since 1960s, continuing as a controversy between Sahlins and Obeyesekere. Kei Yoshida reveals the need for a cogent solution to the problem of rationality. He identifies two main problems with previous theories: first, that they exaggerate the differences between the natural and the social/cultural, and hence they also exaggerate the differences between the natural and the social sciences; and second, that they ignore important social science problems, particularly outcomes from the unintended consequences of human actions. Yoshida urges social scientists not simply to interpret agents' intentions or symbolic systems, but also to explain the unintended consequences of human actions. Still entangled in positivism, cultural interpretivists claim that the social sciences differ from the natural sciences and thus reject any unity of method. Yoshida argues that we need to overcome the mistaken positivist image of science in order to develop a more fruitful philosophy of the social sciences. The analysis presented in this book will be of value to students and scholars of social epistemology, philosophy of science, philosophy of the social sciences, and the social sciences themselves, as well as anyone interested in the philosophical problem of rationality and relativism.
Kei Yoshida is project lecturer at the University of Tokyo.