The Battle of the Labyrinth: Percy Jackson and the Olympians, Book 4 (CD-Audio) 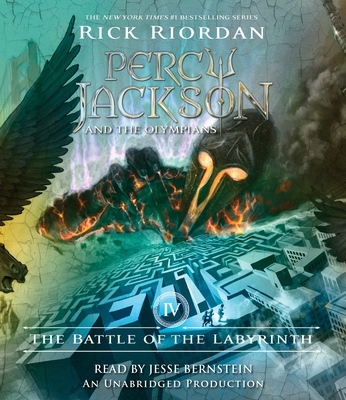 The Battle of the Labyrinth: Percy Jackson and the Olympians, Book 4 (CD-Audio)


Special Order—Subject to Availability
Percy Jackson isn’t expecting freshman orientation to be any fun. But when a mysterious mortal acquaintance appears on campus, followed by demon cheerleaders, things quickly move from bad to worse.

In this latest installment of the blockbuster series, time is running out as war between the Olympians and the evil Titan lord Kronos draws near. Even the safe haven of Camp Half-Blood grows more vulnerable by the minute as Kronos’s army prepares to invade its once impenetrable borders. To stop the invasion, Percy and his demigod friends must set out on a quest through the Labyrinth–a sprawling underground world with stunning surprises at every turn. Full of humor and heart-pounding action, this latest audiobook promises to be their most thrilling adventure yet.
Rick Riordan is also the author of the previous books in the New York Times #1 best-selling series Percy Jackson and the Olympians: Book One: The Lightning Thief; Book Two: The Sea of Monsters; and Book Three: The Titan’s Curse. These titles are all available on audio from Listening Library. His previous novels for adults include the hugely popular Tres Navarre series, winner of the top three awards in the mystery genre. He lives in San Antonio, Texas, with his wife and two sons. To learn more about Rick, visit his website at www.rickriordan.com.