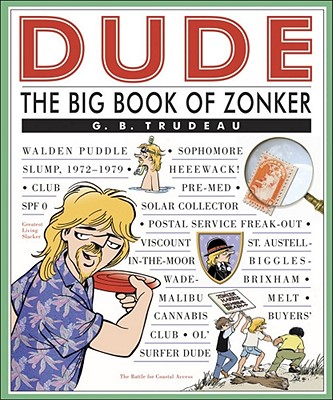 This is book number 26 in the Doonesbury series.

This breathtaking volume boldly, cheerfully, and blankly stares back across the stunningly mellow life and times of Zonker Harris. From his Californian-American roots to his legendary status as surfer, nanny, and former sun god, his career trajectory has unfailingly carried him ever deeper into the homegrown heart of the American daydream. A puddle-plumbing denizen of Walden Commune, Harris spent his formative years as a bodaciously freaked-out college student. His innovative decoding of the rites and rituals of the burgeoning counterculture put him on the cover of Time. Forced by a strategic oversight to graduate from college, Harris blazed a path to glory on the pro tanning circuit. His triumph in the George Hamilton Cocoa-Butter Open set a high watermark for the sport.

Family values led Harris to devote considerable time to helping his stunned parents refill their empty nest. Extended-family values propelled him into a career as a professional nanny, in which capacity he has indeed taught the children well--especially Sam, who was surfing the long board while still in diapers. Later, leveraging his political cluelessness, Zonker served on the disastrous Duke2000 presidential campaign. A devoted foot soldier in the war against AIDS suffering, Zonk is held in high regard among SoCal's medical marijuana community for the efficacious potency of his magic brownies. Unfazed by worldly success, he remains a true and gentle freak. After all, he humbly notes, I am but one dude.
G. B. Trudeau has been drawing his Pulitzer Prize-winning comic strip for more than forty years. In addition to cartooning, Trudeau has worked in theater, film, and television. He also has been a contributing columnist for the New York Times op-ed page and later an essayist for Time magazine. He is a fellow of the American Academy of Arts & Sciences. He lives in New York City with his wife, Jane Pauley. They have three grown children.