Off the Road: A Modern-Day Walk Down the Pilgrim's Route into Spain (Paperback) 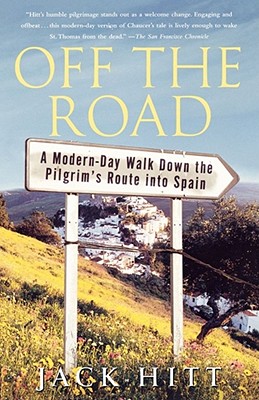 Off the Road: A Modern-Day Walk Down the Pilgrim's Route into Spain (Paperback)


Not On Our Shelves—Ships in 1-5 Days
When Jack Hitt set out to walk the 500 miles from France to Santiago de Compostela, Spain, he submitted to the rigorous traditions of Europe's oldest form of packaged tour, a pilgrimage that has been walked by millions in the history of Christendom.
Off the Road is an unforgettable exploration of the sites that people believe God once touched: the strange fortress said to contain the real secret Adam learned when he bit into the apple; the sites associated with the murderous monks known as the Knights Templar; and the places housing relics ranging from a vial of the Virgin Mary's milk to a sheet of Saint Bartholomew's skin.
Along the way, Jack Hitt finds himself persevering by day and bunking down by night with an unlikely and colorful cast of fellow pilgrims -- a Flemish film crew, a drunken gypsy, a draconian Belgian air force officer, a man who speaks no languages, a one-legged pilgrim, and a Welsh family with a mule.
In the day-to-day grind of walking under a hot Spanish sun, Jack Hitt and his cohorts not only find occasional good meals and dry shelter but they also stumble upon some fresh ideas about old-time zealotry and modern belief. Off the Road is an engaging and witty travel memoir of an offbeat journey through history that turns into a provocative rethinking of the past.
Jack Hitt is a contributing writer for Harper's and GQ. He also writes for The New York Times Magazine, Outside, and Mother Jones, and contributes frequently to public radio's This American Life.
"Hitt's humble pilgrimage stands out as a welcome change. Engaging and offbeat...this modern-day version of Chaucer's tale is lively enough to wake St. Thomas from the dead."
-- The San Francisco Chronicle

"Hitt...recounts his hajj in luminous prose. At times Chaucerian in tone and scope, at times reflective, even magical, Hitt's chronicle resounds with wit, wonder, and curiosity satisfied."
-- Los Angeles Times