The Smart Money: How the World's Best Sports Bettors Beat the Bookies Out of Millions (Paperback) 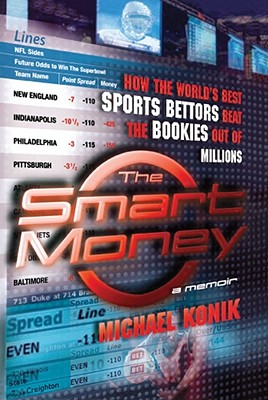 The Smart Money: How the World's Best Sports Bettors Beat the Bookies Out of Millions (Paperback)


Not On Our Shelves—Ships in 1-5 Days
A riveting inside look at the lucrative world of professional high-stakes sports betting by a journalist who lived a secret life as a key operative in the world's most successful sports gambling ring.

When journalist Michael Konik landed an interview with Rick "Big Daddy" Matthews, the largest bet he'd placed on a sporting event was $200. Konik, an expert blackjack and poker player, was no stranger to Vegas. But Matthews was in a different league: the man was rumored to be the world's smartest sports bettor, the mastermind behind "the Brain Trust," a shadowy group of gamblers known for their expertise in beating the Vegas line. Konik had heard the word on the street -- that Matthews was a snake, a conniver who would do anything to gain an edge. But he was also brilliant, cunning, and charming. And when he asked Konik if he'd like to "make a little money" during the football season, the writer found himself seduced . . .

So began Michael Konik's wild ride as an operative of the elite Brain Trust. In The Smart Money, Konik takes readers behind the veil of secrecy shrouding the most successful sports betting operation in America, bypassing the myths and the rumors, going all the way to its innermost sanctum. He reveals how they -- and he -- got rich by beating the Vegas lines and, ultimately, the multimillion-dollar offshore betting circuit. He details the excesses and the betrayals, the horse-trading and the paranoia, that are the perks and perils of a lifestyle in which staking inordinate sums of money on the outcome of a single event -- sometimes as much as $1 million on a football game -- is a normal part of doing business.
"The dean of the world's gambling writers," Michael Konik is the author of six books, including the gaming classic The Man with the $100,000 Breasts. He's written for numerous publications, including The New York Times, Travel + Leisure, and Sports Illustrated. On television, Konik has competed in the World Series of Poker and the World Series of Blackjack, and he appears regularly as an expert commentator on FoxSports poker broadcasts. Visit the author at www.michaelkonik.com.

"Michael Konik knows the world of high-rollers, big losers, hustlers and handicappers as well as anyone anywhere, and the . . . tales of risk and reward he recounts might read like fiction, but they're not." -- The Dallas Morning News

"Michael Konik knows the gambling milieu from the inside. His collection of far-out gambling stories is both amazing and authentic." -- The Independent (London)