Revenge: A Story of Hope (Paperback) 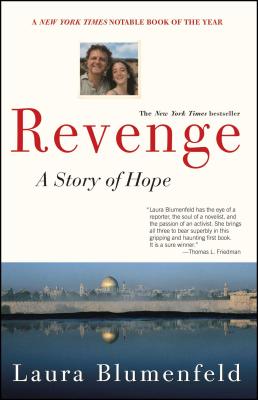 Revenge: A Story of Hope (Paperback)


Not On Our Shelves—Ships in 1-5 Days
Laura Blumenfeld's father was shot in Jerusalem in 1986 by a member of a rebel faction of the PLO responsible for attacks on several tourists. Her father survived, but Blumenfeld's desire for revenge haunted her. This is her story -- and a fascinating study of the mechanics and psychology of vengeance.
While plotting to infiltrate her father's shooter's life, Blumenfeld travels the globe gathering stories of other avengers. Through interviews with Yitzhak Rabin's assassin; members of the Albanian Blood Feud Committee; the chief of the Iranian judiciary; the mayor of Palermo, Sicily; the Israeli prime minister; priests; sports fans; fifth-grade girls; prostitutes; and more, she explores the dynamics of hate -- and the fine line that sometimes separates it from love.
Ultimately, Blumenfeld's target is more complex than the stereotypical terrorist she'd long imagined. In a surprising twist, she gets revenge, but not according to traditional expectations. She discovers a third way, a choice beyond "turn the other cheek" or "an eye for an eye." And with it she answers the age-old question: what is the best revenge?
Laura Blumenfeld holds a master's degree in international affairs from Columbia University and has been a staff writer at The Washington Post since 1992. She has also written for The New Yorker, The New York Times Magazine, and the Los Angeles Times. She lives in Washington, D.C.
Janet Maslin The New York Times A vitally important story....Revenge is written with such forcefulness and immediacy that by the end of her story [Blumenfeld] has carried the reader through an intellectual transformation akin to her own.

Baltimore Sun A remarkable, affecting book...unlike any other reportage from the Middle East.