The Flaming Sword: A Novel of Ancient Egypt (Queen of Freedom Trilogy #3) (Paperback) 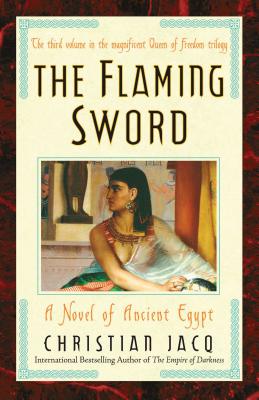 The Flaming Sword: A Novel of Ancient Egypt (Queen of Freedom Trilogy #3) (Paperback)

This is book number 3 in the Queen of Freedom Trilogy series.

In the north, the barbaric Hyksos still rule with unimaginable brutality. Queen Ahhotep, meanwhile, has recaptured much of the south -- but at a terrible price: her husband has been killed in combat and her elder son, Kames, was mysteriously poisoned. Ahhotep refuses to be crowned pharaoh and prepares her second son, young Amose, to take power instead. Thanks to her, the Egyptians are now ready for the final battle. They lay siege to Avaris, the Hyksos capital -- and once the city is taken, nothing can stop them. After 100 years of occupation and thousands of violent deaths, it looks as though the Egyptian empire may at last rise from the ashes.
Christian Jacq, who holds a doctorate in Egyptology, is the author or numerous bestsellers, including Ramses, which has sold more than eleven million copies. He lives in Switzerland.